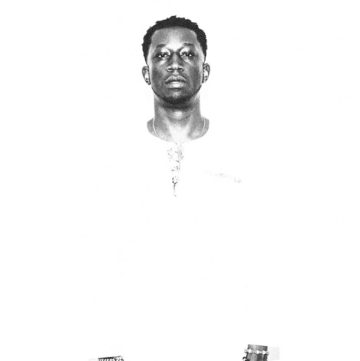 Gold is Kobi Onyame’s third album and his first since 2013’s Glory. Onyame is a Ghanaian artist who is currently based in the U.K. All of his music has been released independently and yet he has built up a sizeable audience and earned himself several awards. For this album he has worked with other artists and as such created a hip-hop album that blends current hip hop with more traditional Ghanaian sounds. This makes for an enjoyable listening experience.

Throughout the album guests such as fellow Ghanaian rapper m.anifest (on the song “”Chosen Ones”), Scottish artist Heir of The Cursed (“Wedadi”), M3NSA (title track “Gold”), Jayso (“No Dey Fear”) and Romanian/Ghanaian artist Wanlov The Kubolor (“Still We Rise”) and bring their own sound and style to the music. As such, the album is very diverse and when listening to it, you just cannot be sure where it is going next.

But pulling it all together and the anchor of the album is Onyame. He has the ability to take various styles and sounds and make them his own. With Gold, he has produced a consistent sounding album. His rapping and use of words is stunning at times and draws the listener into his world.

He writes very personal and political songs. Songs range from devotional love songs, to personal triumphs (the brilliant “No Dey Fear”) to the coming together of people for a more sane and just world (“Still We Rise”). The songs are important statements.

The music is diverse but at times it sounds a bit retro. Some of the music and instruments used takes me back to music coming out of England during the all too brief ‘ska’ phase. Of course Onyame comes by all of this honestly, given his homeland and where he currently calls home, Scotland. This is not a bad thing, but it can be somewhat distracting at times.

When he is less concerned with the U.K. sound being infused, the album works better. However, this is not a major issue and it is part of who Onyame is and the music he is choosing to create. Given he is totally independent, he does as he chooses.

Overall a very unique and well produced album. It is an album made for headphones and also the dancefloor. Fans will enjoy and this may be the album to break him as a major force in the hip-hop/pop world. It is a welcome change from the run of the mill fair on the radio.

This is also an album that grows on the listener with each listening. It has a lot to say and a lot to offer. A very good album.

Born and raised in Whitby, Aaron discovered music through his love of The Beatles. This led to a career in radio, writing for various publications, and ultimately a radio show about The Beatles (Beatles Universe), which ran for over four years. When not immersed in music, Aaron enjoys spending time with the loves of his life -- his wife Andrea, and daughters Emily and Linda (all of whom have an intense love of music too).
RELATED ARTICLES
album reviewsgoldhome
7.0