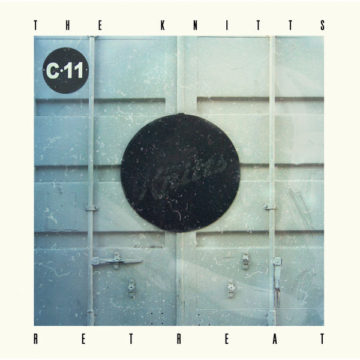 For those of us that have been going to see The Knitts’ live shows for years now, their debut album Retreat has been a long time coming. Over 6 long years. If you HAVE been seeing them in person during that time, some of the songs will be familiar to you. If you are new to The Knitts, you’ve joined the party at a great time.

In a gritty industrial area of Van Nuys, California, behind a powder-coating plant, lie a dozen neatly stacked repurposed shipping containers. One of these is ‘home’ to The Knitts, a band with a surprisingly long history and a short fuse, ready to explode onto the music scene with the release of their debut full-length album Retreat.

The origins of The Knitts go back to the final years of the Knitting Factory on Hollywood Boulevard in Los Angeles, so it’s no surprise that this album comes via Knitting Factory Records. “That’s strangely how the band name came about, from Charlie’s time working the box office,” recalls Justin Volkens of his brother, Charlie Volkens’ time at the club while various future Knitts hung out at KF shows.  Now The Knitts are made up of the brothers Volkens – Justin (Vocals) & Charlie (guitar), along with Victor Portillo (lead guitar), Jaime “Jimmy” Luque (bass)  and Clare Taylor Wilkes (drums).

The Knitts have managed to translate the welcoming party feel from their live shows to this album. Opening with the bubbly “She Likes The Idea of Gold,” you are drawn in immediately – three and a half minutes is long for an opening track, but as you listen with your toe tapping, you won’t feel the time. That same energy is carried throughout each song – with the tinge of unjaded youthful exuberance.

Retreat delivers 12 songs well-arranged and knitted together. It’s poppy yet punkish, with a grit reminiscent of Brit-pop. The lyrics are simple, lending themselves to easy sing-alongs much like early Blink-182. My favorite song on the album is “Get Up! Get Out!” Clever lyrics like ‘you’re the one that took all my failures and turned them into love songs’ are a great anthem for what love feels like. It’s one of those songs worthy of getting up to go hit repeat.

The album concludes with the shortest song, “Sorry Sonny.” At just under two minutes, it’s a quick little ditty with perhaps the simplest of all the lyrics. I’m normally not one to listen to an entire album in one sitting, but after doing just that with Retreat, I found myself (for maybe the first time) starting the songs all over again.

Lucy Rendler-Kaplan is a native Chicagoan, recently returning home after 10 years in Los Angeles. Having worked in field marketing for the past 17 years, Lucy recently left corporate America to work as a consultant. When not running, Lucy can most often be found out with her dog, watching an NFL game, or listening to live local music. Passionate about writing, Lucy enjoys writing about music in lieu of playing it.
RELATED ARTICLES
album reviewsthe knitts
10