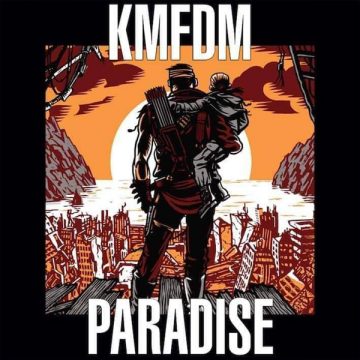 For the past 35 years, German industrial bandKMFDM have been defying rules of genre constraints and proudly giving the finger to authority. With their 21st studio album, Paradise, they have shown no signs of slowing down. In fact, they’re as fired up as ever.

Though industrial by nature, Paradise shows just how much KMFDM love to mess around with what defines a genre. The album kicks off with “K-M-F” which features heavy hip hop elements followed by “Oh My Goth,” a moodier ambient track featuring Lucia Cifarelli on vocals. On a completely different note, “WDYWB” bears a distinct ‘80s synth-pop vibe.

Paradise does not consistently sound as hard or as dark as generally expected, but they do make up for that in lyrical prowess. The title track “Paradise,” which declares that “this planet is a paradise for assholes,” is a bold statement against police brutality. “Piggy” viscerally describes hunting the rich with the vivid lyrics: “Gorge on lions and tigers, bitches dripping with diamonds, sharpen your claws, beg like a dog.”

For a touch of throwback, KMFDM have updated their hit “Megalomaniac” for this album with the track “Megalo.” This version has a much darker and futuristic beat that’s going to be great on the dance floor, something that the whole album is destined for.

The tracks throughout are ones local DJs will easily incorporate into their nightly rotations. Paradise will bring the KMFDM name back to the club circuit.

Samantha is both a writer and a fan of the arts and has been able to find numerous ways to pair the two. Eager to dive head first into writing for Spill, Samantha is an avid partaker and reviewer of live art in Toronto serving as an editor at Mooney on Theatre exploring live local theatre, she's a photojournalist for Been Here Done That, a travel, dining and tourism blog that focuses on Toronto and abroad and previously for Lithium Magazine. She's passionate about music, theatre, photography, writing -- not necessarily in that order. She drinks tea more than coffee, prefer ciders over beers, and sings karaoke way too loudly. You can follow her on various social media including Facebook, Twitter, and Instagram.
RELATED ARTICLES
album reviewalbum reviewskapt'n k
7.0