SPILL ALBUM REVIEW: KINGS OF LEON – WHEN YOU SEE YOURSELF 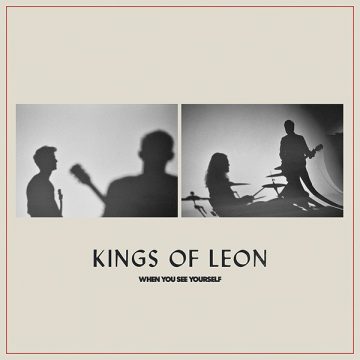 Kings Of Leon
When You See Yourself
RCA

After five long years, Kings of Leon have released their highly-anticipated eighth studio album When You See Yourself, an eleven track collection of majestic, shimmering rock music that retains their signature sound, yet also sees the band developing in subtle new directions.

Opening track “When You See Yourself, Are You Far Away” sets the tone with slow, hypnotic guitar before the bass comes thrumming in (bum, bum-bum, bum, bum-bum) underneath. The next thing you know, that ‘Kings Of Leon sound’ comes out of the ether again, assuming its familiar form. Early single “The Bandit” follows and is reminiscent of many of their prior hits in its muddled desert ghostliness and dramatic build-ups and a future arena shaker.

One thing about the Kings of Leon is that they know how to arrange an album, often following the blustering, big songs with more delicate, but no less intense tracks like “100,000 People” and “A Wave” and “A Supermarket” as frontman Caleb Followill croons with his characteristic longing, while hot coal guitar and tumbling drums groove us along. “Golden Restless Age” shows flourishes of some new wave elements that appear on the fringes of many other songs here, and seems to be a fun new wrinkle compared to previous albums.

In the middle of the album sits the gem “Time in Disguise”, which features the swirling build-ups and hooky lyrics that characterize the strongest tracks in their whole catalogue. Towards the end of the album, “Claire & Eddie” is a sultry romantic, slow dancer about time and change, and a truly beautiful song.

Even though you’ve never heard these songs before, after a few listens it starts to feel like you’ve known them all along. For some that can be a source of critique, but I don’t see it that way. As a whole, When You See Yourself is a welcome new addition to the band’s discography, and cements their status as one of the top rock bands of the last fifteen years.

SPILL ALBUM REVIEW: KINGS OF LEON – WHEN YOU SEE YOURSELF

Dan Kennard is an English teacher and fiction writer living outside Kansas City, Kansas where he lives with his wife and children. More about his work can be found at amazon.com/author/dankennard. You can also follow him on Twitter and Instagram @kennardistry or contact him at kennardistry@gmail.com.
RELATED ARTICLES
album reviewalbum reviewsrca
10