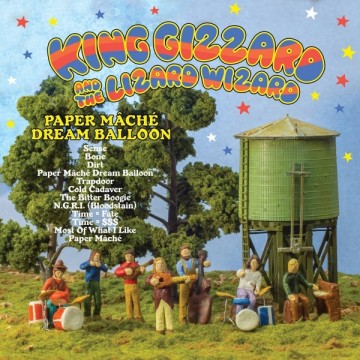 After listening to Quarters, the band’s previous album, it is clear that King Gizzard & The Lizard Wizard is trying to break out of the hardcore garage-psych that dominated their previous output. Quarters, which is made up of four tracks, each more than 10 minutes, brought a new sound to their discography, as they experimented with more melodic tempos and even bringing in a bossa nova jazz feel.

On their latest LP we see the band is taking its experimentation to a new level. The album consists mainly of laid back, feel-good pop songs, similar to that of the ‘60s band Love (particularly their Da Capo era).

From the first track, “Sense,” a groovy tune with jazzy saxophone phrases, we hear the drastic change in direction the band has taken. Gone are the intensely fuzzed-out guitar licks, replaced by beachy pop songs and rich vocal harmonies.

The pulsing bass in “The Bitter Boogie” brings a bluesy feel to feel to the mix, while “Time = Fate” blends folky-pop with raga rock, showing the unbelievable versatility of King Gizzard & The Lizard Wizard.

The albums’ closer, “Paper Mâché,” is an instrumental recap of the other 11 tracks and finishes with trippy effects and for the finale an epic explosion, channeling Love’s Da Capo once again.

The change in direction has paid of for the Aussies. Their take on light-psych pop and layered instrumentation results in a fun and quirky album.

As a child growing up in the suburbs, Ryan found music as a way to soothe his boredom. After first hearing AC/DC at the age of 10, he was hooked on music. Tracing its roots to the ‘50s, he became obsessed with Elvis, Buddy Holly and Chuck Berry. Somehow that led to grunge, then psych-rock, then jazz, etc. The list goes on and on and his collection of vinyl records continues to grow.
RELATED ARTICLES
album reviewsato recordscold cadaver
9.0