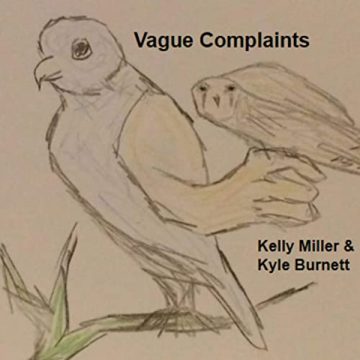 Kelly Miller and Kyle Burnett met in 2018 in Monterrey, California while studying in a master’s program for international environmental policy, and their fast friendship has lead to a promising debut EP titled Vague Complaints that fits in neatly next to other artists like Bahamas or Carl Broemel, and showcases a duo that one can only hope will continue working together in the future.

Opening track “Know How” is a strong one, as a slow guitar intro gives way to flourishes of harmonica by Burnett and heartbreaking ukulele by Angelo Luis Gonzalez, between lyrics like, “I know what to do/but I do not know how,” that are drawn out by Miller’s slow syllabic-paced delivery. It’s a moving track, and the instrumentation is a delicate and beautiful ode to its themes of feeling stuck and unsure but unable to do anything about it.

“Ain’t Seen the Sun Now” is another strong track with clever lyrics about working the night shift in a hospital in a world that seems upside down, one of the many vague complaints evoked by the album’s title, as Miller sings, “Wake up in the evening to a cup of coffee/Come home in the morning to a glass of wine,”  with what I can only describe as an Anthony-Keidis-if-he-sang-folk sort of way.

“Fish” demonstrates the clever lyricism at play here too, with opening lines “There’s other fish out in the sea/But they could never swim with me” turning a cliché against itself in a plea to stay together, and it’s in this track that echoes of someone like Walter Martin pop up in the playfulness of the lyrics themselves and the delivery by Miller.

The rest of the album reveals similar musical avenues that the two are capable of venturing down as Burnett works around the guitar and vocals with timely doses of harmonica, piano, and bass guitar, leaving space for the lyrics and vocals to shine as Miller shows flexibility in his delivery, even dipping fingers into folk-country here and there late in the EP. Each song in the collection, while in the same musical territory, brings a little something different to the table and suggests there are more places for these two to go.

Dan Kennard is an English teacher and fiction writer living outside Kansas City, Kansas where he lives with his wife and children. More about his work can be found at amazon.com/author/dankennard. You can also follow him on Twitter and Instagram @kennardistry or contact him at kennardistry@gmail.com.
RELATED ARTICLES
album reviewalbum reviews
8.0