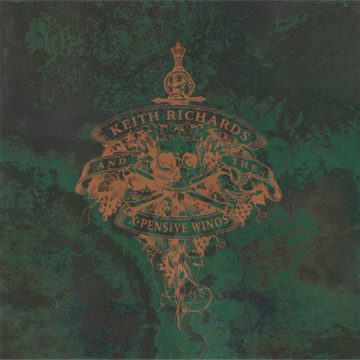 It’s a special occasion when Keith Richards decides to step out on his own. While these moments are increasingly rare, they almost always stand as highlights among a truly legendary career. The Rolling Stones’ guitarist and songwriter – and objectively the coolest person to simply walk the earth – has returned with his first solo outing since his acclaimed 2015 studio album, Crosseyed Heart, with a reissue of his 1988 live album with his band, The X-Pensive Winos, Live at the Hollywood Palladium. Previously only available on a long out of date CD, the reissue brings the exciting live record to life on streaming platforms and vinyl for the very first time and includes three previously unreleased tracks.

Opening with “Take It So Hard”, Richards and company are in very fine form. With a well-rounded sound, The X-Pensive Winos bring a heavy blues sound reminiscent of early Stones material are an incredibly tight outfit. Richards’ vocals are gruff and gravelly, yet melodic and soulful, while his guitar playing is rhythmic, slick, and deeply steeped in the blues tradition. The band is further enhanced by their prominent use of keys, lush backing vocals, accenting horns, and, of course, Steve Jordan – perhaps the living epitome of taste and groove – on the drums.

Performing nearly all of his 1988 debut solo album – his only solo record at the time – Talk Is Cheap, along with a handful of Stones deep cuts, and some covers, Live At The Hollywood Palladium truly is a curated collection of some of Richards’ favourite material of the time and from his back catalogue. Naturally, Stones songs like “Little T&A”, a stunning duet on “Time Is On My Side”, “I Wanna Be Your Man”, and the quintessential Keef cut, “Happy” stand out as obvious highlights. What speaks volumes for songs from Talk Is Cheap – “Make No Mistake”, the boogie shuffle of “Big Enough”, and “You Don’t Move Me”, the climatic closing track – is their ability to strongly stand beside that from The Stones. Additionally, Richards & The X-Pensive Winos’ foray into reggae on a cover of Half Pint’s “Too Rude” is a surefire knockout. Front to back, Live At The Hollywood Palladium is a stellar live record and delivers Richards at one of his definite peaks.

Live At The Hollywood Palladium is a time capsule into a tour and era in Richards’ career that is simply unlikely to happen again. While there are countless live releases from The Rolling Stones, this is Richards’ in a different light. The reluctant frontman, the human riff moved centre stage, the consummate bluesman who, in a changing musical landscape of the late ‘80s, refused to shift with the times. While rock got a lot faster and heavier and seemingly everyone else was going pop, Live At The Hollywood Palladium is Richards doubling down on the blues and digging deep into his oldest of influences. The result is a passionate performance full of conviction and tradition. Never one to chase trends, Richards & The X-Pensive Winos strike gold with Live At The Hollywood Palladium.

A passion for music has always been a part of Gerrod’s life. As a young boy, he was raised on a steady diet of the music from The Chili Peppers, Aerosmith, The Stones, Prince, and others from his mum. Raised in the GTA, Gerrod continued to foster his love for music by attending a wide range of concerts and learning the drums. His unapologetic passion for music has no bounds and has spread to a wide variety of styles, whether it be the 90’s rock that sound tracked his teenage years, the jazz he studied in university, or his newfound love for hip-hop. He recently received his bachelors in music and education from York University and is passionate about writing and reviewing good (and less than good) music. Gerrod is also the drummer and songwriter for a Toronto based rock & roll band, One In The Chamber.
RELATED ARTICLES
album reviewalbum reviewskeith richards
8.0