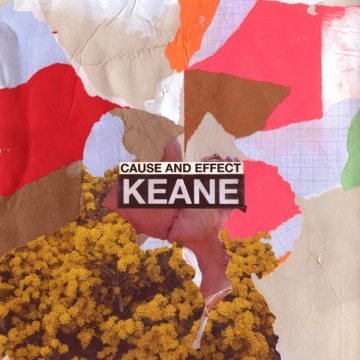 Keane
Cause And Effect
Island Records

Keane comes at us with no surprises here, and remain keyboard heavy, which is good news for fans. On Cause and Effect, their first full-length album since 2012’s Strangeland, the band still has its propensity for manufacturing emotionally heavy pop songs with a noticeably blatant, but at times more subtly underlying layer of misery and sadness, lurking beneath the optimistic surface.

Stand-outs include the opener “You’re Not Home” with its spacey, driven synth which slowly morphs into a powerful and pounding track. Shades of M83 and Rufus Wainwright can be heard in style and substance.

“Phases” is also worthy of mention, with hints of ‘80s pop reminiscent of Erasure and A-ha, shining through with heavy synth and mellotron. Chaplin sings of past regrets and budding optimism for the future.

“Chase the Night Away” is a very catchy number, which provides Chaplin a vehicle in which to vocally shine. The lyrical warmth brims with confident sanguinity as Chaplin harmoniously sings

“You can chase the night away/
you heal me like the light of day/
you can keep me searching on/
you say it won’t be long/
till all the pain we felt is gone/
it won’t be long.”

Chaplin’s voice remains as vehemently powerful as on Keane’s early releases, which works well with the theme of the seemingly never-ending quest for happiness and reflection on regrets, which can be understood by most on one level or another.

Cause and Effect is a good album and a welcome addition to Keane’s catalogue for both reference and live performances. Hopefully Keane gets the recognition that they deserve on resurrecting their collective careers and continuing to release material that is greatly worthy of a pleasing listen.

John Graham is a Vancouver-area resident who typically spends most days admiring music of all genres. When not listening to music, John is usually at a live show, somewhere in the bowels of Vancouver.
RELATED ARTICLES
album reviewalbum reviewsisland records
10