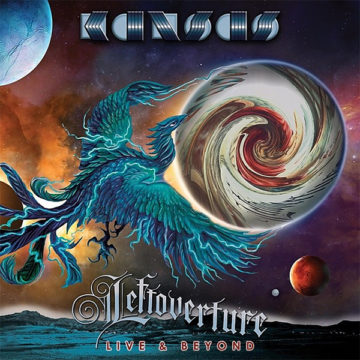 Kansas
Leftoverture Live And Beyond
Inside Out Music

A good live album is a difficult thing to produce. As for great live albums, there are but a handful. The Concert For Bangla Desh, The Who Live At Leeds, Viva Roxy Music are examples of great live  albums, perhaps the best of the genre. Kansas has just produced a live album that sits between good and great. There are moments on Leftoverture Live and Beyond that are brilliant, and then there are moments that are just good. In other words, Leftoverture Live and Beyond is a bit uneven.

Kansas have been around for a very long time. They formed in 1973 and their debut album was released in 1974 (Kansas).  But it was not until they issued their fourth album in 1976 (Leftoverture) that the band achieved success. Leftoverture made top ten, basically due to their first hit single “Carry On Wayward Son”, which they perform to perfection on this live album.  Since 1976, Kansas released 11 further studio albums, and an astonishing seven live albums. Their last live album was in 2009 (There’s No Place Like Home), but this album is perhaps their best live release.

Over the years there have been several lineup changes, with drummer Phil Ehart and guitarist Rich WIlliams being the only two original members for this incarnation represented on the album,  but it does not matter a great deal. They have recruited some top notch players, and they are able to not only replicate the original songs, but in some ways enhance and bring the songs to 2017 prog rock standards — and yes, over the years the standards have changed. Relative newcomer Dave Ragsdale deserves special mention for his virtuoso violin playing.

The other thing that adds to the overall sound and feel for the album is the band’s choice to have Jeff Glixman produce the album. You may remember he produced the original studio album of Leftoverture over 40 years ago, but here he is working with more than just those songs, and he is also working with a finished product. In other words he has the tapes of the live performance, and he has to work with what he has without the aid of a studio. He certainly rises to the occasion. The sound of this album is fantastic. 40 years may separate the albums, but he knows how to make this band sound good.

The hits are here and sound as they should, but it is some of their deeper cuts that are the most interesting moments. For example, “Journey From Mariabronn”, from their 1974 debut album, comes to life here. “Portrait (He Knew)” from the album Point of Know Return sounds like it has not aged a day. Even the ‘newer’ songs, such as “The Voyage of Eight Eighteen” from their 2016 album The Prelude Implicit sounds stronger than the original studio recording.

Where the album has issues is with some of the lengthy solos and instrumental parts of song. The playing is excellent, but it at times it does drag the song. The ten and a half minute live version of “Magnum Opus” (from Leftoverture)  is a good example of this playing.

Leftoverture Live and Beyond is a souvenir of their 2016 40th anniversary of Leftoverture tour. The fans who attended were treated to much more than that album, and this live album does a fair job of representing that tour. Fans will definitely love it, and I I am not so sure this will earn new fans but it is well worth the time to listen — and you will need time, it is close to two hours — and serves as an excellent example of American ‘Prog rock’.

Here's what we think...
Spill Rating
Fan Rating
Rate Here
New Criteria
10
25.4
7.0
Total Spill Rating
25.4
Total Fan Rating
6 ratings
You have rated this
Album Reviews
album reviewscarry on wayward sondust in the windinside out musickansasleftoverture live and beyond
album reviews, carry on wayward son, dust in the wind, inside out music, kansas, leftoverture live and beyond
About the Author
Aaron Badgley

Born and raised in Whitby, Aaron discovered music through his love of The Beatles. This led to a career in radio, writing for various publications, and ultimately a radio show about The Beatles (Beatles Universe), which ran for over four years. When not immersed in music, Aaron enjoys spending time with the loves of his life -- his wife Andrea, and daughters Emily and Linda (all of whom have an intense love of music too).
RELATED ARTICLES
album reviewscarry on wayward soninside out music
9.0