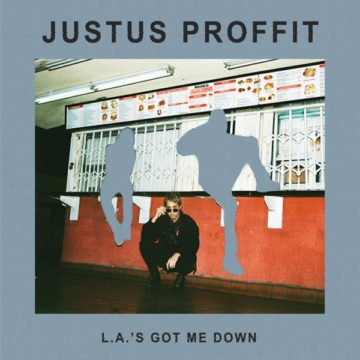 Justus Proffit
LA’s Got Me Down
Bar/None Records

For his previous work on various L.A. band EP’s and DIY solo projects, 26-year-old Justus Proffit has received startlingly good reviews from various respected outlets such as the New York Times, Pitchfork, Paste, and Stereogum, and once again he has delivered a solid album on his first full-length label debut.

Proffit who started playing in bands at the age of 13 and began touring at 16, plays all of the instruments on the 11 tracks that are included in LA’s Got Me Down, and is assisted in the production only by Producer/Engineer Alex Resoagli.

The first single, “Painted In The Sound”, is a nice piece of jangly rock, and “Shadow Of The Cross”, which boasts a killer chorus, Proffit equates to his own “Back In Black.” Other standouts include “Solidified,” “Hold, “and “Closed View.”

Profit credits cutting the toxic people out of his life for his newly-found positive attitude, and he looks forward to getting on with his life, after his tumultuous beginnings growing up, punctuated by the loss of many close friends due to drug overdoses.

This is without doubt a strong debut album, and apart from the odd short instrumental intro that opens the album, it boasts a plethora of fine tunes, fuelled by the artist’s personally difficult time growing up in L.A., the loss of many close friends, and battling his own personal demons.

Gerry Young is President of Current Records and Management, and author of the 2011 biography Pop Goes The Weasel: Rock And Roll Off The Record, available at Indigo/Chapters, Barnes & Noble, and Amazon.com. He has recorded and managed Juno Award winning bands Martha And The Muffins and The Parachute Club among others.
RELATED ARTICLES
album reviewalbum reviewsbar/none records
8.0