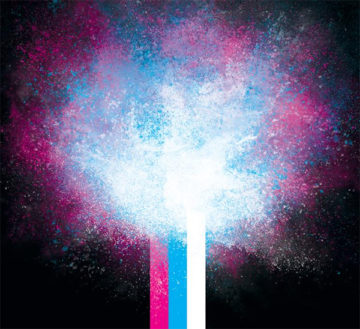 City Nights, the most recent release from Toronto based indie rockers The Junction, is a record which takes all the tropes and expectations of the genre and flips them upside down, in what can best be described as a strong artistic statement for Toronto’s rapidly developing indie rock scene. The band, consisting of Brent Jackson (guitar/vocals), Matt Jameson (bass), Mike “Tip” Taylor (drums), and Marcus Wong (guitar), have over the course of its ten songs, demonstrated how the style can develop in a way that builds on the current state of the genre by reaching back to 1980s pop for inspiration.

The album kicks off with the catchy “Rock Bottom”, a song with an energy that is nothing short of infectious, while creating a slightly eerie feeling with a hint of darkness lying underneath the bouncy pop driven track. Much like the rest of the album, “Rock Bottom” seems to fit with the romanticizing of the nightlife offered in most big cities; it’s fun, exciting, and indulgent, but to ignore some of the seedier undertones would mean loving only one side to the city. This is the same case with City Nights: it is certainly fun, and some songs — “To The Lovers”, “Night And Day”, and  “Reversing You” in particular — feel as if they could be featured in a major summer blockbuster for their cheerful and exuberant vibes, which radiate off their sonic pulses; however that is only one story found across the album.

The Junction shines best when they suggest or hint at the darker shades of their songs.  Just like any urban area, City Nights is not without its alleys and dive bars. Whether it be the melancholic tone of “Lay It Down”, the minor chords (and crunching minimalist guitar solo — a definite highlight across the album) of “Set Free”, or the haunting ambiance of “Reversing You”, City Nights is not all sunny day pop tracks. It is here, or in “Rock Bottom”, the opening and strongest track on the album, where the Junction are at their more convincing and deep as a band.

As a whole, City Nights is a fun album that will certainly be loved by fans of The Junction.  Despite that, there are parts that feel slightly repetitive, making some of the songs blend too closely together; however that does not stop The Junction from creating an album which looks to give a soundtrack to millennial-meets-hipster city life. For fans of the indie rock/pop genre, City Nights is definitely worth checking out, but it will not be a crossover hit with those who do not find the modern indie scene to be of much interest.

You can catch The Junction at their release party for City Nights at Toronto’s Horseshoe Tavern on June 3rd.  Get your tickets here!

A passion for music has always been a part of Gerrod’s life. As a young boy, he was raised on a steady diet of the music from The Chili Peppers, Aerosmith, The Stones, Prince, and others from his mum. Raised in the GTA, Gerrod continued to foster his love for music by attending a wide range of concerts and learning the drums. His unapologetic passion for music has no bounds and has spread to a wide variety of styles, whether it be the 90’s rock that sound tracked his teenage years, the jazz he studied in university, or his newfound love for hip-hop. He recently received his bachelors in music and education from York University and is passionate about writing and reviewing good (and less than good) music. Gerrod is also the drummer and songwriter for a Toronto based rock & roll band, One In The Chamber.
RELATED ARTICLES
album reviewsculvert musicthe junction
9.0