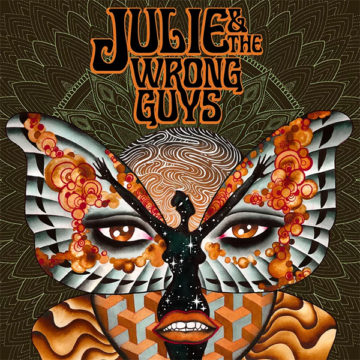 Julie, from Julie & The Wrong guys is Julie Doiron of Eric’s Trip fame (not to mention her numerous solo albums and other side projects). The Wrong Guys are Mike Peters and Jaye Schwartz (of Cancer Bats fame) and Eamon McGrath (Edmonton singer/songwriter). The band first played together in 2011 and has been doing shows since. Last year they issued a single (one side of the single is included on the album, the A-Side “Homeless” is not on the album), and now, finally, the album is finished.

And, for the most part, it was worth the wait. This is a strong, consistent, rocking album with some of Doiron’s strongest vocals ever. For the last few years, she has focused on her folk music, which is brilliant, but here she channels her Eric’s Trip days and as a result we have a strong, aggressive album.

It is a great album but it is not without its own issues. The main problem with Julie & The Wrong Guys is that there are no surprises. It is exactly as one would expect with this line-up of artists. The playing is great, and the band is tight, but a few curve balls would have been really nice.

Having said that, what they do, they do well. The songs are loud, fast and everything you would expect. But they are also remarkably melodic and accessible. The songs are short bursts of energy and sound great. The album is well produced and well mixed.

Lyrically, Julie & The Wrong Guys does not stray too far from a formula of angry love songs, songs about independence or just angry songs. That’s fine, in this day and age, such songs are more than welcome. However, there are some brilliant lines, such as in “Call My Own Shots”, a song that lyrically deviates from the norm. It also features the best lines on the album “Should I even try, I am being bullied by yesterday.” Terrific lyrics and excellent music to go with it.

Fans who caught their show in the past will love this album. There is nothing new to discover, which, is not a bad thing. They are as they present themselves. A great rocking album and a brilliant debut. I look forward to further records from the band as they discover themselves more and grow.

Born and raised in Whitby, Aaron discovered music through his love of The Beatles. This led to a career in radio, writing for various publications, and ultimately a radio show about The Beatles (Beatles Universe), which ran for over four years. When not immersed in music, Aaron enjoys spending time with the loves of his life -- his wife Andrea, and daughters Emily and Linda (all of whom have an intense love of music too).
RELATED ARTICLES
album reviewsdine alone recordsjulie & the wrong guys
9.0