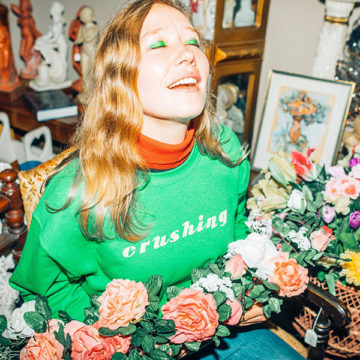 After the success of her debut album, Don’t Let the Kids Win, Julia Jacklin has released her 2nd LP, Crushing, and it’s a wonderfully heartfelt followup that elevates Jacklin as a musician and artist. Jacklin sings about tour life, and love and loss, and allows listeners to feel these moments with her through somber melodies and upbeat rhythms.

Jacklin’s songs are filled by her country vocals and alternative riffs which create an almost psychedelic rock experience, as her ability to convey her emotions through brighter tones make for unique and pleasing musical escapes. “Head Alone” is among the strongest songs in the album, as Jacklin discusses love and infatuation and what they truly mean. Her lyrics expose us to human truths through inviting and swift musical shifts, and although this is the case for most of the songs on the album, there are moments when the album can feel tiresome. As a listener, you have to truly be willing to become hypnotized by these songs, and that’s when its magic works the best.

Julia Jacklin creates wonderments in her sophomore album, and her earthly and grounded vocals can be chilling. Since the release of her first album, Don’t Let the Kids Win, which placed her among a long list of great indie pop artists, Jacklin has continued to be emotionally honest and musically creative, and Crushing is a cathartic and beautifully crafted experience.

Joseph Dominguez resides in a small-town from Southern California. In 2018, he received a Bachelor’s Degree in psychology from San Diego State University. Here is where he broadened his love for music and writing. He took these strengthened bonds back to his hometown, where he plays drums in a band, writes music journalism and fiction, and exercises his love for pop culture.
RELATED ARTICLES
album reviewalbum reviewsbody
8.0