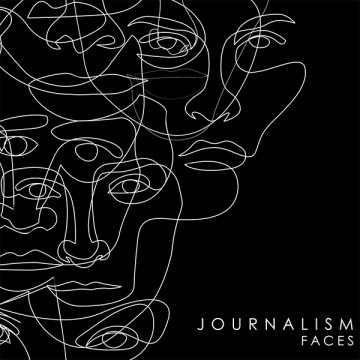 Trying to break out and be noticed in a music scene is never easy, especially if that city is Brooklyn, whose scene is so dense that it is nearly impossible. Journalism’s first LP, Faces, deals with this topic and does so rather well.

Journalism started in 2012 when frontman Kegan Zema and former bassist Owen Keiter met at New York University. Since the forming it has produced one EP, released in 2014, and has become a prominent figure in its hometown of Brooklyn. Now with the release of its first album, they are trying to break out of its local scene.

Faces maintains the band’s jangly guitar sound that was present on its EP, 1324. In the two years since that EP, the band has clearly grown and has adopted more distortion into its sound. It is the product of a band that has worked its ass off since the beginning.

“Faces I” kick starts the album with its pulsing drum beat and bass riff. A reverb drenched guitar lick is then heard which transforms into an epic post-punk jam, akin to that of Public Image Ltd. The song is confident and is a perfect of example of how Journalism has grown since its first EP.

Journalism shows off its indie influences with “Everywhere I Look” which begins with traces of Johnny Marr-style guitar peppered throughout.

For all its post-punk glory, Faces definitely has some roots in surf rock, with the guitar palm muting on “Faces II” and catchy ‘60s riff in “Watching & Waiting.”

“Naked,” the final track on the album, is built around a catchy guitar lick and lush, layered vocals. It is by far the most sullen track on the album (apart from the thrashy guitar, bass and drum parts near the end).

Each track on this album is energetic and unique. The themes of self-doubt are truly distinct. For a first album, Faces is remarkable.

As a child growing up in the suburbs, Ryan found music as a way to soothe his boredom. After first hearing AC/DC at the age of 10, he was hooked on music. Tracing its roots to the ‘50s, he became obsessed with Elvis, Buddy Holly and Chuck Berry. Somehow that led to grunge, then psych-rock, then jazz, etc. The list goes on and on and his collection of vinyl records continues to grow.
RELATED ARTICLES
album reviewsdead stare recordsfaces
10