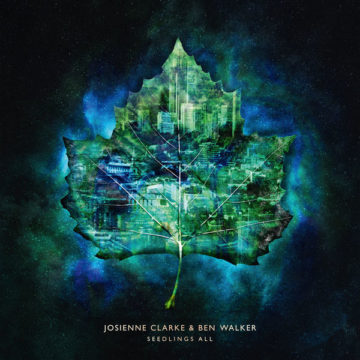 Coming off a very well received album in 2016, Josienne Clarke and Ben Walker have dropped their latest album Seedlings All. The album has a great message behind it because the 2016 album had good reviews, but the American tour that followed and the album sales were less than glowing to put it nicely. The duo uses the incredible beauty of Clarke’s voice and the impeccable instrumental skills of Ben Walker to deliver their desired message.

Clarke’s songwriting shines through most of all on Seedlings All. The touching lyrics are accompanied by Walker’s guitar giving the duo a wonderfully jazzy feel, while keeping true to their indie folk styling that they’re well known for. The opening track “Chicago” is a heart wrenching song that also inspires hope for the group. It talks about the failed concert they had in Chicago and how that is inspiration to improve and have an even better show next time, despite how much it hurt to play before such a small crowd. “Seedlings All” is the title track that just shows the hope the group has. The song is all about how everything is still in its infancy. Their careers, their lives, their skill, everything is just going to grow and get better. “Tender Heart’ is all about how expectations are not always what we get. Clarke talks about how she expected to be mother but isn’t, for example, and all of that is okay. It deals with people going down different paths. Nothing is set in stone. “Bathed in Light” is a folk styling that fans will be very welcoming to hear. It has wonderful guitar work that is simple, yet elegant. Again, Clarke’s voice fits the bill perfectly for this song.

Seedlings All is a haunting album that carries with it a serious note of excitement for what the future holds. The dulcet tones of Clarke’s voice hit all the right notes, literally and emotionally. Walker’s musical prowess helps a great amount. The duo is so incredibly talented that it is just a treat to hear them. Expect great things from them in the future.

The Spill Magazine is a Toronto-based online publication dedicated to covering the independent music scene with a strong focus on our thriving hometown talent. Our writers bring you up-to-date news, in-depth features on musicians and reviews for the latest CD releases. We also travel to the front lines for all local festivals including Canadian Music Week and North by Northeast. Don’t forget to check out our Facebook and Twitter pages for all daily Spill updates.
RELATED ARTICLES
album reviewschicagorough trade records
7.0