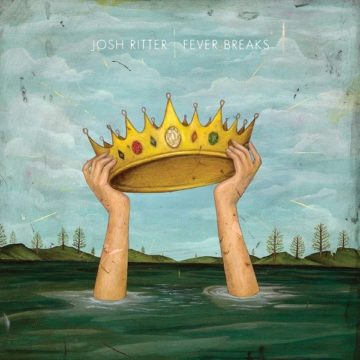 Recorded down in Nashville, Fever Breaks may be Josh Ritter’s most obviously country album. From the instrumentation and lyrics to the vocal inflections Ritter uses as he sings phrases like “y’all say that you’re doing well livin’ down in Arkansas” over a pedal steel guitar lick, it all has a distinctly country sound.

This is likely due to producer Jason Isbell and his band The 400 Unit, whose influence is especially apparent on grungy rock tracks like “Old Black Magic” and “Losing Battles”. Distorted guitars ring out over cymbal crashes and stomping bass drum, while Ritter sprinkles his shrewd, fluid wordplay over all.

Ritter’s clever lyricism has been an essential part of his previous work and Fever Breaks does not disappoint. Lyrically, the album continues the introspective thread established in 2013’s A Beast In Its Tracks, as Ritter meditates on love, relationships, identity, and more in the midst of fiery guitar licks and smooth instrumentation. Standout tracks include “I Still Love You (Now and Then)” and “A New Man”.

In some ways, this album is a little derivative of other artists, as Ritter wears his influences on his sleeve. One notable example is how he channels Bob Dylan and Leonard Cohen on “The Torch Committee”, mimicking their pacing and rhythm. However, rather than simply reusing clichés, Ritter uses these influences as tools, applying them to his own style of songwriting to make music that is interesting and unique.

Overall, this is a solid release from a talented songwriter. Varying from acoustic folk to stomping Southern rock, it currently stands as one of the best country-folk albums of the year.

Kieran Davey is a freelance writer and music enthusiast from Vancouver, Canada. He particularly enjoys alternative rock, groovy hip-hop, and basically any music from the 60's. Aside from reviewing music, he also loves playing guitar and spending time in nature.
RELATED ARTICLES
album reviewalbum reviews
10