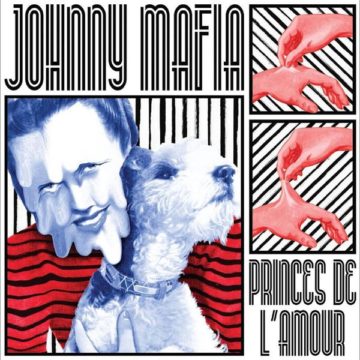 Returning with their first full length album since their 2016 debut, Michel​-​Michel Michel, Johnny Mafia have released Princes de l’Armour. Much like the rest of the Dirty Water Records roster, Johnny Mafia is an old school punk band in a tone straight from the 1970’s. Hailing from France and reminiscent of The Ramones and T. Rex, Princes de l’Armour proves to be a strong followup in the bands career.

Opening with the rhythmic shots and build-up of “Big Brawl”, the song is driven by a flurry of power chords and lush layered vocal harmonies which sounds nostalgic for Oasis and separates Johnny Mafia from their peers. Similarly, “On The Edge”, “Feel Time Feel Fine”, and “Secret Story” sound influenced by the Britpop scene of the ‘90s and 2000s which gives Princes de l’Armour a refreshing and unique edge.

While their more melodic songwriting voice makes them stand out, Johnny Mafia shine brightest when the music is angsty and aggressive. Songs like “Crystal Clear”, “Ride”, and “Sun 41” all stand as some of the strongest tracks on the album. Closing track “The Shelf” however was my favorite on the album with its haunting riff and its catchy chorus fuelled by the contradicting glossy vocals and unrelentingly heavy guitars.

As their third overall release and their sophomore full-length album, Princes de l’Armour is a solid step forward for Johnny Mafia as they take their retro punk sound and outfit it with a melodic sense of sonic exploration.