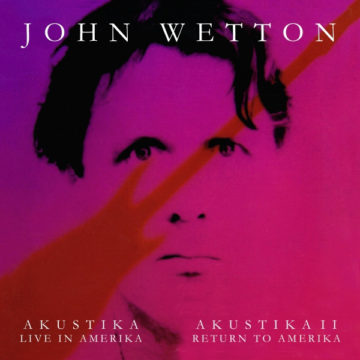 John Wetton was a talented artist. His extensive musical resume is breathtaking. If he had just formed the incredible band UK, he would deserve praise. But he did more, Asia, King Crimson, iCon, Wetton/Manzanera, soundtracks, and of course his own solo music. He accomplished a great deal in a relatively short time. His loss in January of 2017 was monumental.

CD One is the original album, Akustika – Live In America.  Wetton touches on most aspects of his career, but of course focuses on Asia (“The Smile Has Left Your Eyes”, “Only Time Will Tell”, “Heat of The Moment”) but he also revisits UK (“Rendezvous 602”) and King Crimson (“Book of Saturday”). The songs hold up extremely well done in this fashion, but especially “Heat of The Moment” with just Wetton and his guitar. Slowed down, the song takes on new meaning.

CD Two is a 2005 concert in similar fashion. His voice is a little bit older and the arrangements are a little more sparse, but they work perfectly. This CD has previously been unreleased, which leads one to think of the other treasures in the Wetton archive. His cover of “Walking On Air” is beyond description. It is an amazing song to begin with, but Wetton, with just piano, takes the song into darker spaces and it is breathtaking. One of the best cover versions of any song I have ever heard. It is magic.

Again, Wetton touches on all aspects of his career on this collection. When one has is career and available catalog it must be very difficult to know what to dip into, but Wetton was smart enough to mix it up and these songs together form a whole new project. “Meet Me At Midnight” from iCon is simply beautiful. iCon was a brilliant project and here the song comes to life in ways the studio did not. This, along with the “Rendezvous 602” are worth the price of admission alone.

This is not prog rock. Some of the songs have their origin in that genre, but here, stripped down, one hears the nucleus of the song. The melody, emotional lyrics, and subtle arrangements. This CD allows one to hear the music in its purest sense. I am not knocking the originals, as I am a fan, but they are presented quite uniquely here. Also, there is a chance, especially on CD two, to have a glimpse into Wetton’s sense of humour. He is clearly having fun revisiting these song.

This two CD set, complete with a wonderful booklet of heartfelt memories of Wetton by friends, is a beautiful tribute. It is well put together, well produced and well thought out. One can only hope that there will be more brilliant issues of archival material in the future.

Born and raised in Whitby, Aaron discovered music through his love of The Beatles. This led to a career in radio, writing for various publications, and ultimately a radio show about The Beatles (Beatles Universe), which ran for over four years. When not immersed in music, Aaron enjoys spending time with the loves of his life -- his wife Andrea, and daughters Emily and Linda (all of whom have an intense love of music too).
RELATED ARTICLES
album reviewsasiajohn wetton
8.0