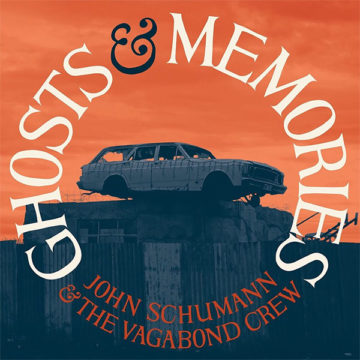 John Schumann was the front man of the group Redgum, a group he left to form The Vagabond Crew in 2005, their name coming from a Henry Lawson poem. He also released several solo albums. Ghosts & Memories is their third studio album and perhaps their best.

This is Australian folk music, which incorporates roots rock and roll. In many ways this is Woody Guthrie brought into the 2010s, and one cannot help but think that this is what Strummer tried to achieve with The Clash. Schumann writes stories, vignettes of everyday life, and the music reflects his lyrics. The stories reflect political views, both globally and personally.

The music is bittersweet, just listen to the opening song, “Times Like These”. The music roams from rock to celtic-like folk, reflecting the heartfelt lyrics. A song that is not so much a protest song or angry song about the problems with the world but more a sad, pleading song for things to change. Simply beautiful.

The album touches on many themes such as the life of John McDouall Stuart (a Scottish explorer who did a great deal of inland exploring of Australia), migrant workers, Anzac history, climate change and relationships. Ghosts & Memories touches on so much that it may appear to be scattered, but it is not. Schumann is able to pull it all together to make it work and in the end, Ghosts & Memories comes together as a whole piece of art.

The Vagabond Crew provides the perfect backing for Schumann. They are tight and work as unit. There are guests as well. Rob Hirst (Midnight Oil) makes an appearance and his drumming stands out and adds even more passion to the album.

The title, Ghosts & Memories, speaks to the presence of Hugh McDonald, a guitarist who was a member of Redgum with Schumann and joined the Vagabonds in 2005. In 2016 he passed away from complications due to prostate cancer. His voice, guitar, and his writing is heard  on the album. In fact several songs were finished without him being present.

There are many styles throughout this album, but each song is distinctly Schumann. He dips his toes into several genres but they all come together to form a cohesive album. He may not have a big name on these shores, but that will change with the release of this album. Ghosts & Memories is an album created by an artist who has developed his own sound throughout the years. Yes, Schumann and  The Vagabond Crew wear some of their influences on their sleeves (Weddings, Parties, Anything and Paul Kelly come to mind) but this does allow Schumann to flex his writing muscle and show off the hot band with whom he works.