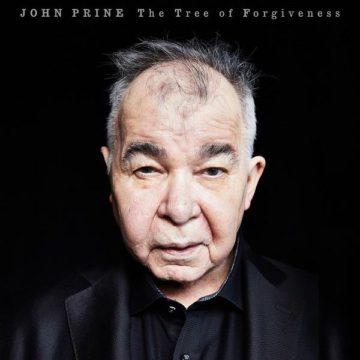 A new album from John Prine is always reason to celebrate, but an album in which he wrote or co-wrote all the songs is an even bigger reason to rejoice. The Tree of Forgiveness is the first album since 2005’s Fair & Square where Prine has written the songs. He has issued albums since then, but like Bob Dylan, they have been albums of cover versions, but this album is Prine and, I would argue, Prine at his best.

Prine co-writes with old friends and longtime collaborators on this album. He even wrote a song with Phil Spector — he started writing the song, “God Only Knows”, decades ago.  Pat McLaughlin, Roger Cook, and Keith Sykes have worked with Prine in the past. He has made some new friends too in Dan Auerbach, who co-wrote the brilliant “Caravan of Fools”,  and Brandi Carlile, who duets with Prine on the beautiful “I Have Met My Love Today”.

For the past twenty years, Prine has suffered a lot of health issues including two bouts of cancer, and on this album he does not directly comment on that, but its presence is felt throughout. Just one look at the sleeve photo and you know Prine is not shying away from  anything. It is a stark photo of an artist who has survived. Mortality is a big theme on the album. There are other themes, but they all come back to loss of life. You will note that God and Heaven pop up in songs and song titles throughout the album.

The album is also a love song to his wife, and there is nothing wrong with that. His usual word play is present and he comes up with some lines that make the listener stop, think and pay attention. But love songs to his wife do not mean he is not angry about other areas in life. Listen to one of the many highlights, “The Lonesome Friends of Science”:

“Those bastards in the white lab coats,
Who experiment with mountain goats,
Should leave the universe alone,
It’s not their business, not their home.”

Lyrically, this is one of the best albums Prine has written. The album ends with the song “When I Get To Heaven”. It is part recitation and part song. It will make you laugh and cry. A perfect ending to the album.  Love and mortality are the themes of this soon to be classic album.

Musically, producer Dave Cobb (Oak Ridge Boys, Sturgill Simpson, Shooter Jennings) lets Prine do what Prine does best. His voice is more gravelly than before, but it adds to the songs, it never detracts. The sparse musicianship adds to the songs — Jason Isbell plays some tasteful slide guitar on “God Only Knows”. Recording at the historic RCA Studio A in Nashville adds to the overall sound of the album.

This is an important album. There are not a lot of artists/writers around like Prine, and anything new from him should be recognized as the hero’s return. Tree of Knowledge is an album full of imagery and a great deal of human emotion. It is an honest account of one man’s life, and perhaps the album of the year.

Born and raised in Whitby, Aaron discovered music through his love of The Beatles. This led to a career in radio, writing for various publications, and ultimately a radio show about The Beatles (Beatles Universe), which ran for over four years. When not immersed in music, Aaron enjoys spending time with the loves of his life -- his wife Andrea, and daughters Emily and Linda (all of whom have an intense love of music too).
RELATED ARTICLES
album reviewsjohn prineoh boy
8.0