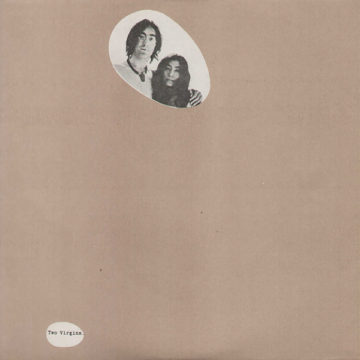 Secretly Canadian and Sean Lennon’s Chimera music are endeavoring on a reissue campaign (called the Yoko Ono Reissue Project) of Yoko Ono albums, which include her more experimental albums with John Lennon.  Sean Lennon has overseen the releases along with Ono.  Two Virgins is part of the first batch being reissued (the others include Unfinished Music No. 2: Life With The Lions and Yoko Ono/Plastic Ono Band).  Incredibly, this is the first official vinyl reissue of the album since it’s original Apple release in November, 1968 (the album had been reissued in 1997 on CD, which featured a bonus track.)  Lennon and Secretly Canadian have replicated the original issue beautifully, complete with the brown outer sleeve.

This album is famous for a few reasons.  One, following the recording of the album, John and Yoko became a couple.  Second, it was the first solo album by a Beatle.  Third, the cover was very controversial and banned in several states and countries.  The cover, of course, featuring a naked John and Yoko.  The album became one of the most talked about and least listened to records in rock history.  So, what can a listener expect to hear on this album.  Well, experimentation is the word.  This album was recorded over one night with John providing sound effects, synthesizer doodlings and talking while Yoko used her voice.  Is it pleasurable listening, well, no.  Is it interesting?  That is subjective.  I like it for its experimentation and noise.  Not the first of its kind, but the first by a major pop artist (Lou Reed’s Metal Machine Music would not exist were it not for this album).  But this album is not for everyone.  If you skip over “Revolution 9” when listening to ‘The White Album”, this may not be for you.  But it is an interesting footnote in rock history, and I for one am glad it is available again (also, first time digitally, which includes the bonus track on the CD issue).

Born and raised in Whitby, Aaron discovered music through his love of The Beatles. This led to a career in radio, writing for various publications, and ultimately a radio show about The Beatles (Beatles Universe), which ran for over four years. When not immersed in music, Aaron enjoys spending time with the loves of his life -- his wife Andrea, and daughters Emily and Linda (all of whom have an intense love of music too).
RELATED ARTICLES
album reviewsjohn lennonsecretly canadian
8.0