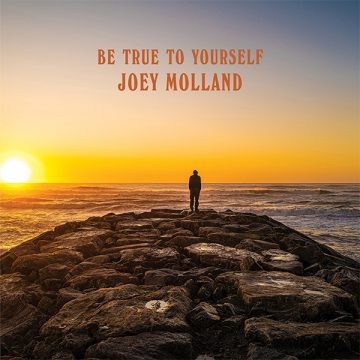 Joey Molland
Be True To Yourself
Omnivore Recordings

Joey Molland is the sole surviving member of Badfinger, and he tends to tour as Joey Molland’s Badfinger. Fair enough, given his incredible solo albums never took off and achieved the success Badfinger experienced in the first half of the 1970s.

The album has a lot going for it. Firstly, it has a stellar supporting cast. Molland has called on some friends, and includes contributions by Julian Lennon, Micky Dolenz, Jason Scheff (bassist for Chicago and other bands,) and Steve Holly (Wings drummer from their final lineup).  Under Hudson’s direction, the ensemble have come together to produce near perfect pop music. Additionally,  Julian Lennon, who is also an acclaimed photographer, took the stunning front and back cover photography.

It is hard finding anything wrong with this album. Long before Big Star, Badfinger had perfected the power pop or rock/pop sound. On Be True To Yourself, Molland revisits those years by coming up with melodic, beautiful rock songs featuring stellar musicianship and flawless harmonies and vocal arrangements. It is easy for the album to be drowned in the guest stars, but Hudson is too smart for that. He utilizes the musicians to put Molland squarely in the spotlight. Make no mistake, this is Molland’s album, and he has the talent and ability to pull it off.

Molland wrote all the songs with Hudson, with one exception, “Rainy Day Man” that was composed with Gary Burr (who also worked with Ringo for the albums Hudson worked on), and what is clear is that Molland works best with a co-writer. His other solo albums are great, but with another writer, his best qualities come out and it is as if he has the permission to allow his influences and history to shine. There are moments throughout the album that propel one back to the Badfinger days.

The opening track, “This Time”, sounds like an outtake from on Ringo Starr’s albums, but Molland puts his own spin on it as it glides into the chorus. “Better Tomorrow” references early 1970s George Harrison, complete with a horn arrangement that would have been found on 33 ⅓. It works here because it fits the overall feel of the song. After all these years The Beatles comparisons continue, but who better to be compared with?  Elsewhere, ballads, such as the epic “Heaven” keeps the album interesting, and features one of Molland’s best vocals.

The closing track, “Be True To Yourself” is really the cornerstone. Musically, it is stunning. Tipping his hat to psychedelia, it just moves along with great backing vocals, lyrics, and arrangement. It is the perfect way to end the album. It also carries a wonderful message that, no doubt, Molland is telling himself, but in actuality speaks to just about everybody listening.

Be True To Yourself is a fantastic album. Molland has returned, after a far too long absence, with a work of art. It proves that his best days are not behind him, but here and now. It is the kind of album that as soon as it is finished, you want to start it all over again. In fact, I think I will. Give it a spin on your device of choice and enjoy.

Born and raised in Whitby, Aaron discovered music through his love of The Beatles. This led to a career in radio, writing for various publications, and ultimately a radio show about The Beatles (Beatles Universe), which ran for over four years. When not immersed in music, Aaron enjoys spending time with the loves of his life -- his wife Andrea, and daughters Emily and Linda (all of whom have an intense love of music too).
RELATED ARTICLES
album reviewalbum reviewsbadfinger
7.0