SPILL ALBUM REVIEW: JIMI HENDRIX – BOTH SIDES OF THE SKY 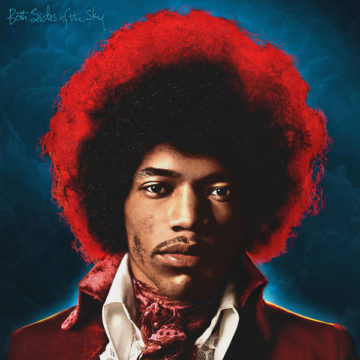 Jimi Hendrix
Both Sides Of The Sky
Legacy Recordings

In 1994, MCA records gathered up all of Hendrix’s blues-rock outtakes and compiled them on an album, titled simply Blues. 24 years later it still stands as one of the best, if not the best, posthumous recording in Jimi’s catalogue. All these years later and after a countless amount of “previously unreleased” Hendrix material we finally have Both Sides of the Sky, an album that can hold its rank with the iconic Blues LP.

Now there are definite similarities between the two records, but Both Sides of the Sky is not a sequel to Blues. It actually is the third installment in a series of Hendrix releases that began with Valleys of Neptune back in 2010, which was followed by People, Hell and Angels three years later.

While Both Sides of the Sky, mainly features Hendrix’s Band of Gypsies lineup, bassist Noel Redding and drummer Mitch Mitchell, both from the Experience, make appearances on “Hear My Train a Comin’”. The song, now available for the first time since it was recorded in early 1969 is one of the last sessions from the Jimi Hendrix Experience.

Other legendary performers who make some appearances are Stephen Stills singing and playing organ on “$20 Fine” and a groovy cover of Joni Mitchell’s “Woodstock”. Johnny Winter also lends a hand with some slide guitar on “Things I Used to Do”, bringing out that old Hendrix blues feel. He also reunites with former bandmate Lonnie Youngblood from his days with Curtis Knight & the Squires, on “Georgia Blues”. Hendrix’s pentatonic licks tracks are bone shatteringly good.

But let’s face it, the reason you’re gonna listen to the record isn’t because of the guest musicians, it’s because it’s a fucking Hendrix record. The instrumentals “Sweet Angel” and “Jungle” give us some classic Stratocaster-wielding from the iconic axeman, but it is his cover of Muddy Water’s “Mannish Boy” that upstages everything else. Even though it is almost identical to the version featured on Blues, that can be over looked because it is so damn good. The main riff in the song is pure funk-rock goodness that’s so possessing you have to listen to it on repeat to get it out of your system.

Both Sides of the Sky is the first great Hendrix in almost two-and-a-half decades and it’s fair to say that that statement will never be written again.

SPILL ALBUM REVIEW: JIMI HENDRIX – BOTH SIDES OF THE SKY

As a child growing up in the suburbs, Ryan found music as a way to soothe his boredom. After first hearing AC/DC at the age of 10, he was hooked on music. Tracing its roots to the ‘50s, he became obsessed with Elvis, Buddy Holly and Chuck Berry. Somehow that led to grunge, then psych-rock, then jazz, etc. The list goes on and on and his collection of vinyl records continues to grow.
RELATED ARTICLES
album reviewsjimi hendrixlegacy recordings
6.0