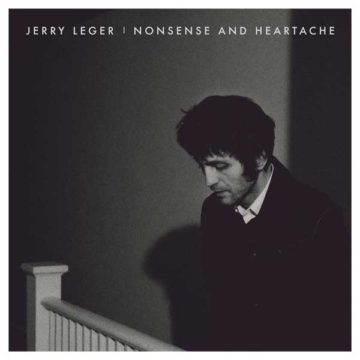 Jerry Leger’s Nonsense and Heartache navigates multiple terrains with confidence and flare. Two records combined, the striking duality of the album features the textures of a bold, bluesy electric sound in Nonsense simmered by the raw, subdued acoustics of Heartache.

Both halves feature on-the-fringes characters with uncertain futures. Opener “Coat On The Rack” kicks off the album with high-octane energy, formidable guitar work, and a defiant Dylanesque vigor and voice for the down-trodden. The similarities to the folk rock singer extend into the album’s second half. Leger’s music video for “Troubled Morn” features compelling and arcane lyrics scrawled on bits of paper à la “Subterranean Homesick Blues”. The song’s lyrics include compelling and vivid lines like these:

“Coaster brakes/ the clown can’t hide/ when joy runs away/ though the makeup tries/ circus flames/ the lion grabs the whip/ saying goodbye/ with one last trick. Shine your lust/on my bare wall tonight/Let me be the light/in your troubled morn.”

The stark and weighted images bring the songs to life. Leger’s lyrics describe nowhere and everywhere, subverting and enhancing meaning. In songs like “Wedding Dress”, “It Don’t Make The Wrong Go Away” and “Pawn Shop Piano”, country fairs, cigarettes from corner stores, and seedy motels all feel a little less mundane and a little more poetic as they linger on the listener’s ears.

The decision to combine these short records into one album allows vastly different, but equally compelling experiences to coexist. The record blends a multitude of genre mixing blues, power rock, folk and contemplative Americana. Both sides skillfully tap into the subjects being chronicled, whether hard-travelled cynic, runaway outlaw or jilted lover.  These characters all come alive with colour and care.

Elizabeth is a Toronto via Caledon writer whose rural upbringing left a lasting love of anything with a banjo and an upright bass. She scours Toronto venues for both the musical talent and the beers on tap.
RELATED ARTICLES
album reviewsjerry legerlatent recordings
8.0