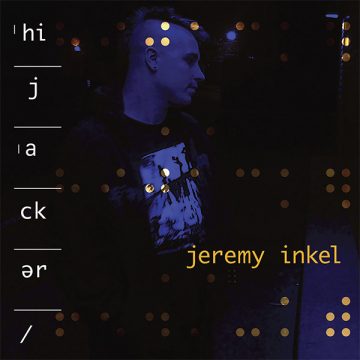 Jeremy Inkel was a musical scientist whose work featured prominently in his roles with Frontline Assembly and Left Spine Down. He also offered significant contributions to Delerium and Noise Unit. He spent many years on the road with bands like Ministry and Skinny Puppy and co-writing hit songs with Frontline Assembly. Unfortunately, his solo album Hijacker arrives three years after his untimely passing. Hijacker was the album Inkel always wanted to create, a body of work that was uniquely his own.

Hijacker is an instrumental album serving up funky house and techno beats, with EBM and industrial vibes thrown in for good measure. This is an album that you can dance to but also have playing in the background while you work. It’s an album that blends nicely into the background of your day to day. It is  unobtrusive yet lively, and will lift your mood.

Inkel was known to be a workaholic who dove late into the night creating new music. Hijacker is definitely a testament to that. If you are familiar with Inkel’s work with Frontline Assembly, you will definitely hear a similar sound here. There are also notable elements of Deadmau5 and Stephan Bodzin woven into this album.

If you’re listening to Hijacker as background music, there are certain tracks that are sure to spark your interest and get you dancing – “WAYVY” stands out with a heavy base and drop that will be a welcome addition at any rave alongside “Dig”. “Lucid” is just as the title suggests – fluid, groovy, and haunting.

Unfortunately, Jeremy Inkel is not around to see his prized solo work received by his fans, but it’s safe to say that Hijacker will be a hit and a true celebration of his career.

Samantha is both a writer and a fan of the arts and has been able to find numerous ways to pair the two. Eager to dive head first into writing for Spill, Samantha is an avid partaker and reviewer of live art in Toronto serving as an editor at Mooney on Theatre exploring live local theatre, she's a photojournalist for Been Here Done That, a travel, dining and tourism blog that focuses on Toronto and abroad and previously for Lithium Magazine. She's passionate about music, theatre, photography, writing -- not necessarily in that order. She drinks tea more than coffee, prefer ciders over beers, and sings karaoke way too loudly. You can follow her on various social media including Facebook, Twitter, and Instagram.
RELATED ARTICLES
album reviewalbum reviewsartoffact records
7.0