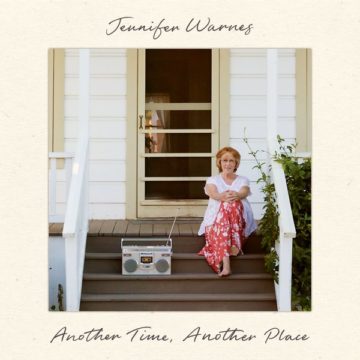 Jennifer Warnes released her debut in 1968 (I Can’t Remember Everything), and although the album was critically acclaimed, it failed to chart. However, that album and her second one came to the attention of Leonard Cohen, and beginning in  1971, she formed a lifelong friendship with him. She toured with him and sang on many of his albums. Her biggest album, Famous Blue Raincoat (1987) was an entire album of Cohen songs. Perhaps because she was so busy with Cohen and other studio work and tours, she did not release many solo albums. Another Time, Another Place is her ninth solo album. In the long ago, this album might have been classified ‘adult contemporary’, but it is more than that. Warnes does produce a quality pop song, but she is never far from her folk roots.

Warnes does not work fast. Her last album was released in 2001 (The Well).  In the seventeen years between albums, Warnes had enough to keep her busy, including a great deal of loss (her mother, a niece, sisters, her longtime manager, and of course her good friend Leonard). The opening track of the album reflects loss and is a brilliant cover of Pearl Jam’s “Just Breathe”. Warnes slows the song down, and lets it breathe. With the sparse production, beautiful arrangement and Warnes’ aged but beautiful voice, she makes the song her own.

Warnes co-produced the album with her longtime collaborator, Roscoe Beck. He knows her, and knows her strengths and is able to make sure these are highlights of the album. They both know how to pick the perfect songs too. It is so good to hear her cover of Mickey Newbury’s “So Sad”. Warnes brings the pain to the surface and again, she uses her voice to full effect. She even takes a turn with Mark Knopfler’s “Why Worry”, a beautiful and suitable closing song for the album.

They also assembled the cream of the crop in terms of session players. But again, the music does not overpower Warnes, and her voice becomes another instrument. She has emotion in her breath and it has been too long since her voice has been heard.

Born and raised in Whitby, Aaron discovered music through his love of The Beatles. This led to a career in radio, writing for various publications, and ultimately a radio show about The Beatles (Beatles Universe), which ran for over four years. When not immersed in music, Aaron enjoys spending time with the loves of his life -- his wife Andrea, and daughters Emily and Linda (all of whom have an intense love of music too).
RELATED ARTICLES
album reviewsanother time another placebmg
8.0