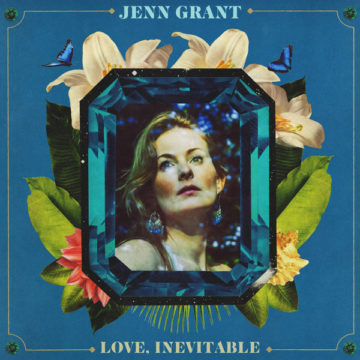 Jenn Grant has released her seventh album titled Love, Inevitable. This album has an airy sound to it with Grant’s effortless voice gliding through each song. Love, Inevitable was recorded last summer in Portland, Oregon and this shows through the breezy feel to her music. Grant sounds like she is happily singing on her front porch on a peaceful summers day. Her voice is reminiscent of Dolores O’Riordan from The Cranberries, however, Grant’s voice is more delicate.

The songs on the album range from pop-y tunes such as “Raven,” to more folk sounding songs like “Keep A Light On.” An honourable mention from the album is the song, “Sweet Grass.” This song stood out to me because of the obvious switch that happens from cool and fragile tones to a more bold and edgy sound. Her voice is crystal clear as she sings about her “greatest love.”

The album really shows her deep connection with nature as there is a lot of symbolism derived from the outdoors, which also adds to its free-spirited feel. Love, Inevitable is a beautiful album that showcases Grant’s smooth and nuanced voice, while highlighting her love of nature, and the struggles of life. If you are in the Toronto area and want to hear Grant’s newest album, you can catch her live on June 1st at the Danforth Music Hall at 7 pm.