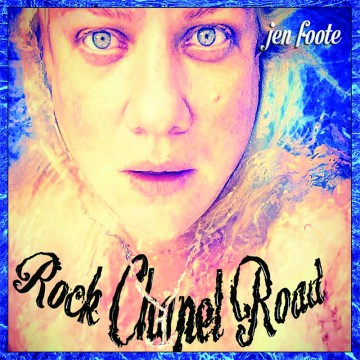 The first thing that stands out on Jen Foote’s Rock Chapel Road full length release is the superb production quality and playing that supports her wonderfully comforting voice. The producer and musician behind the technical wizardry is Canadian bluegrass legend and Juno winner J.P. Cormier; his musical touch seamlessly glues all parts together with first-rate perfection. Not since Kirsten Jones’ The Mad Mile album has there been such an amazing Canadian acoustic female singer-songwriter’s release. This sounds like the work of Nashville’s A-list.

Rock Chapel Road would not have been a reality if Foote hadn’t picked up a pen and wrote to Cormier, who at the time was already a very well established Canadian Bluegrass player and somewhat of a hero and major inspiration to Foote’s songwriting. With no real expectation of a reply, Foote received a note back from Cormier inviting her for a chance to work together. After nearly dying and going straight to heaven from the news, Foote set off for Nova Scotia to record the best of her last 15 years of bluegrass songwriting and the results were well worth the wait.

Standout tracks include “Don’t Care,” a killer finger-picking blazer with technical perfection from start to finish. The tune is an upbeat love song about telling a lover that she’s no doormat and that there will be no more waiting around. The tune will get you moving and would be perfect for a country drive. The title track seems nestled deep in the hills of The Carolinas with its traditional flat top picking and mandolin strumming. Although Rock Chapel Road is actually a rural side road in Foote’s hometown of Dundas Ontario, the tune is straight up meat and potatoes comfort food for the soul. The song’s story is based around hometown folklore and the darker side of its history with family battles and old world hangings that sound like they were pulled right out of a old western movie.

A wonderful change of pace comes in the form of a mid tempo waltz titled “Little Girl,” a tune that really warms the heart and could easily find itself in a major Hollywood production. The song gives the album a sonic fork in the road, seasoning it with Spanish flare and some beautifully executed classical guitar work. As the album winds down, an outstanding track titled “Oh Boy” grabs you firmly by the heartstrings and leaves you speechless with its alluring and seductive melody. The tune sways with musical beauty and lyrical drama as the story speaks of a lover pining for the return of her man from long journeys through icy winds and dark woods. “Oh Boy” contends for the best song on the album.

Bluegrass fans should expect to be pleasantly surprised by Jen Foote’s superb sophomore release; although she’s somewhat of a newcomer to the scene, there’s no doubt that this album will comfortably establish her among some of Canada’s bluegrass elite.

Andre has been writing for The Spill Magazine for over 12 years, dating back to the print days. His passion for music goes far beyond writing reviews for new music and live concerts, he is also an active musician and producer on the Canadian music scene. Having toured North America and Europe with various acts, he is no stranger to dedication and work ethic new bands must endure to make the grade in today's market; Andre always delivers perspective writing that is authentic and to the point. Mr. Skinner typically covers indie rock, grass roots, electronica and is our resident hard rock and heavy metal specialist. He is extremely selective on what bands he covers for articles and you can rest assured they are ALWAYS band to watch with something left of centre to offer.
RELATED ARTICLES
album reviewsoh boy
10