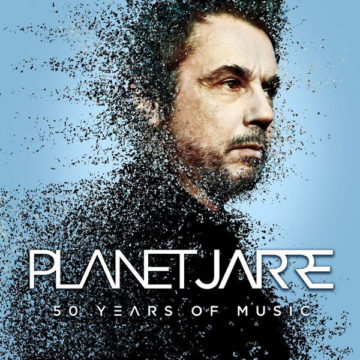 It is hard to believe that Jean-Michel Jarre has been making music for 50 years, but the truth is he just celebrated his 50th Anniversary and he is still going strong. As part of the 50th anniversary  celebration, Jarre has assembled a new compilation album that pretty much hits upon all aspects of his career as a solo artist (prior to his debut album in 1972, Deserted Palace, Jarre was a member if The Dustbins  and Groupe de Recherches Musicales aka GRM).   Planet Jarre demonstrates how he  grew from his debut to the complex music he has made over the past two decades. It shows how an artist started with experimenting with electronic music and sounds, and evolved with the new instrument and new form of music.

Jarre  has put this package together and very wisely separated the songs into four very distinct groups. He does not arrange the songs chronologically, but rather in groups that fit a genre or type. The four groups are : “Soundscapes, “Themes”,“Sequences”,“Explorations and Early Works”.  The titles are pretty self-explanatory. Jarre’s career is so eclectic and influential that he could have made a double CD of each of the groups, but he has trimmed down his selection and presents what he thinks are his best work or work that fits together.

Compilations are a no win situation, you are not going to please all the fans. Some with think certain songs should not be present while complaining others are not on the collection. But I am not sure this is for the extreme fan, more for the casual fan and those few souls who have yet to discover the genius that is Jarre. But collectors will be happy with the inclusion of two new songs, “Coachella Opening” and “Herbalizer”. Both quite essential songs to the Jarre catalogue. Collectors should also take note of the demo of “Music For Supermarkets”, a song which was pressed as a single vinyl copy single, one copy, Many never believed it existed, but it does and here it is for the collectors.

Summing up Jarre and his impact on music, especially electronic music, is impossible. And trying to put together a sampler is an equally impossible task. Yet, Jarre has done an extremely good job with this collection. Touching on all aspects and most of his albums allows one to witness this man’s genius. He can construct one of the most beautiful melodies, and yet compose some of the most complex electronic music on this earth. One may have to work at it, but it is well worth the effort.

Jarre paints landscapes with sound (i.e. soundscapes), but it is more than that. This is music that demands and gets the listener’s attention. One must simply lose themselves in this music. He uses the synthesizer, loops and electronics in such a way that the music is beautiful and sometimes disturbing. He successfully creates mood and emotion with an instrument that is often thought of as ‘cold’.

Planet Jarre is a brilliant collection. What an album does, or should do, is to have the listener running to their local record store and obtaining albums and listening to theses songs in their album contexts. The songs work on this collection, but they sound even better on their original album.

Collectors, please note, there are a few variations of the album, and it is available in many formats, including cassette.

Born and raised in Whitby, Aaron discovered music through his love of The Beatles. This led to a career in radio, writing for various publications, and ultimately a radio show about The Beatles (Beatles Universe), which ran for over four years. When not immersed in music, Aaron enjoys spending time with the loves of his life -- his wife Andrea, and daughters Emily and Linda (all of whom have an intense love of music too).
RELATED ARTICLES
album releasealbum reviewalbum reviews