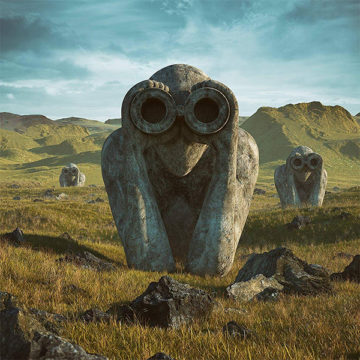 Perhaps it is their age, perhaps it is their level of confidence, but  there are a number of established artists releasing albums in which they do what they do best. They are not trying to compete with the today’s pop sensations but rather cater to their own artististic integrity and perhaps their loyal, core following. Jean-Michel Jarre is one of those artists. Over the last few years he has rereleased older material and created sequels to older works. He continues in that vein with this new, brilliant album, Equinoxe Infinity, which is a sequel to 1978’s Equinoxe.

Jarre continues with his exquisite electronic-based music, creating mood, emotion and atmosphere. He does this so well, that he is able to convey a story or theme through an album without a single lyric. This is quite an accomplishment. This is basically a concept album about Earth being watched by unknown spectators. The purpose of their surveillance, you are to decide, but Jarre is able to convert this through the use of music, sounds and arrangements.

The album is broken into ten movements, each one quite distinct and quite stirring. Listen to “All That You Leave Behind (Movement 4)”, which starts off quite melodic and beautiful, and ends with robotic sound effects indicating that things are not boding well for us humans. Then give a listen to the title track, “Equinoxe Infinity (Movement 10)”, which is worlds apart from “All That You Leave Behind (Movement 4)”. Both fantastic songs, but the mood and the focus is different for both of them, the former, somewhat disturbing, the latter somewhat sad.

What Jarre does on this album, which makes it so great, is to develop a somewhat retro sound. This is electronic music from the ‘70s, with a little technology from today, and it adds to the overall album. Jarre writes interesting and melodic songs that capture your attention and keep it. And, let us be clear, this is an album that should be enjoyed from beginning to end in one sitting. Sure the movements are great songs, but the material works better when it is listened to in context with the other songs.

Jarre has released yet another stellar work. Fans will enjoy the album, and in many ways it is a brilliant introduction to his work for those not familiar with it. Fans note that there is a Super Deluxe version available, which includes the original album. The packaging also includes two different sleeves, both brilliant.

Born and raised in Whitby, Aaron discovered music through his love of The Beatles. This led to a career in radio, writing for various publications, and ultimately a radio show about The Beatles (Beatles Universe), which ran for over four years. When not immersed in music, Aaron enjoys spending time with the loves of his life -- his wife Andrea, and daughters Emily and Linda (all of whom have an intense love of music too).
RELATED ARTICLES
album reviewalbum reviewsequinoxe
9.0