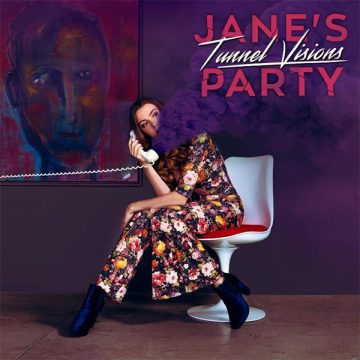 Ok, let’s talk about lead single “Coming On Strong” by Jane’s Party. You can’t help but groove to the catchy upbeat tune – the lyrics, harmonies, and melodies just stick. To enter the full immersive experience, check out their karaoke-inspired music video featuring Jim and Devin Cuddy, Shad, Brave Shores, and Elise Bauman, among others. The production element of Coming On Strong is spot on, co-produced by The Darcys and featuring Jim Cuddy on backing vocals. It will not disappoint.

This is the fourth album released by Jane’s Party – made up by the ones and onlys, Devon Richardson, Tom Ionescu, Jeff Giles, and Zach Sutton. The Toronto-based boys have grown up and come a long way since starting their band way back in 2006. You can tell that after two years in the making, they really ensured to give their newest album Tunnel Visions their all. Blue Rodeo’s Greg Keelor not only produced it, but recorded it at his farm in Southern Ontario. There’s a wide variety on this 10-track album of original tunes, whether you’re looking for up-tempo, a lil’ Country, mellow, Pop, Rock, Grunge, you name it.

These songs will resonate with anyone and everyone – it’s about “being on the road, about losing loved ones, about growing up and coming to grips with life.” Latest and greatest – Tunnel Visions, under Cadence Music, will be officially released on May 13. If you’re a Jane’s Party keener and want to get in on the buzz before then, make sure to check out their show at the Horseshoe Tavern on May 12.

Originally from Toronto, Giselle is exploring the worlds of entertainment and social change through a musician's lens. With a background in Environmental Studies and Music Business, she works to establish her own voice in the music scene.
RELATED ARTICLES
album reviewscadence music groupcoming on strong
8.0