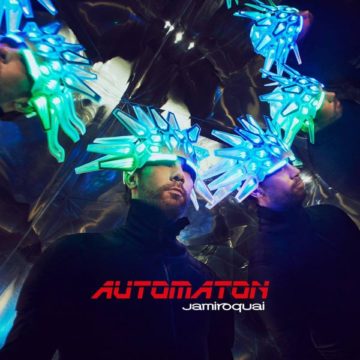 From the dark ashes of winter springs Grammy award-winning global electronic soul funk superstars, Jamiroquai, return with their eighth studio album, Automaton. Written and self-produced by Jay Kay and keyboard-master Matt Johnson after a six-year hiatus, Automaton is a welcome breath of familiar pop-funk from a happier era.

“The inspiration for Automaton is in recognition of the rise of artificial intelligence and technology in our world today and how we as humans are beginning to forget the more pleasant, simple and eloquent things in life and in our environment including our relationship with one another as human beings,” says Kay.

Automaton is a logical progression from Jamiroquai’s natural, dance-oriented themes (Jamiroquai the name came from a blend of “jam session” and Native American tribe Iroquois). The group’s standard deep, funky synth bass lines and Kay’s high vocals and quirky lyrics and raps soar through the album. New catchy, automated melodies and guitar riffs are interspersed with digitized, orchestral hits to deliver a dose of AI/VR.

The album opens strongly with “Shake It On,” a Kraftwerk-eque track until Kay’s vocals come in – then you know you are listening to a Jamiroquai album. The title track “Automaton” and its AI-inspired video, directed by Charlie Lightening (Arcade Fire, Bjork), has jarring but blended rhythmic motifs that make more sense after watching an embodied AI-like Kay – whose headdress and large hats are replaced with white, glowing robotic headwear – wander and dance (Northern-Soul- inspired) through an empty London Underground and desolate countryside that is littered with remnants of machines and, low and behold, a metal headdress.

Echoes of early Jamiroquai and 1990s house dance tracks are heard in “Summer Girl” and “Carla;” the latter specifically recalls Armand van Helden’s 1999 hit, “Flowerz.” Traces of Prince and Daft Punk (who technically came after Jamiroquai) are also present throughout Automaton. For the lovers out there, “Cloud 9,” “Hot Property,” “Something About You” and “Carla” are Kay’s new upbeat love songs. “Nights Out in the Jungle” is an urban Atari-Ayahuasca funk ballad – psychedelically reminiscent of early hip hop breaks – with a bleary, almost terrifying, bad-trip bridge and fade out. Is this an ominous nod to the AI future or too many (bad) drugs in the concrete jungle?  Whatever Jamiroquai’s message is, Automaton brings trippy disco funk back just in time for the summer.

Talia Wooldridge is an avid music lover, composer and ethnomusicologist who contributes artist interviews, live concerts, festivals and album reviews for Spill Magazine. She has written extensively on the intersection of music, personal identity and cultural symbolism with an early focus on Latin American Hip Hop and female Cuban rappers. In her spare time, Talia writes, composes music and manages Music Can Heal, a non-profit that brings live, award-winning musicians to inspire healing in hospitals, hospices and communities in need. Her next project is an interactive music-travelogue exploring music cultures and music travel around the globe. Follow her here: www.taliawooldridge.com + www.movetoyourownbeat.com.
RELATED ARTICLES
album reviewsuniversal music canadavirgin emi
10