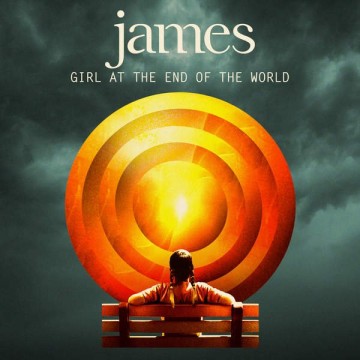 James
Girl At The End Of The World
BMG Recordings

For the most part, James has always been a singles band, known more for their hits than their albums. That’s not to say that their LPs are bad – Gold Mother and Laid are classics – but a fair amount of them are bogged down with filler.

Their latest album, Girl at the End of the World, falls somewhere in the middle. It is not bad by any means, but many of the songs that don’t really stand out. “Bitch” and “Nothing But Love” are solid tracks, but both are a far cry from classics like “Come Home,” “Laid” or “How Was it For You?”

“Bitch” gets things started with distorted guitar licks and pumping bass line. During an intro that’s over two minutes long, the band layers an array of guitar riffs and spacey synth lines that display the group’s musical range.

Unfortunately, on many tracks Tim Booth’s voice is mixed beneath the other sounds; that’s unfortunate, as Booth’s vocals often carry the band. However, “Alvin,” one of the album’s more upbeat songs, does not suffer from that ill-advised mixing choice. The song is better for it.

Girl at the End of the World does make clear that James are not afraid to experiment. For a band now on their 14th release, that’s an impressive quality. The disc features more electronic elements than any previous James LP. Occasionally the synth vibe feels overused, but it’s absolutely right on the New Order-esque “Dear John.”

Longtime James fans will rejoice when they hear “Waking.” The track, a highlight of Girl at the End of the World, finds James returning to their glorious Madchester days. The album’s title track, which is also the closer, features melodic slide guitar that conveys a sense of hope.

In sum, there’s no doubt that Girl at the End of the World – like most James albums – includes filler material, but its stronger moments make it ultimately worthwhile.

As a child growing up in the suburbs, Ryan found music as a way to soothe his boredom. After first hearing AC/DC at the age of 10, he was hooked on music. Tracing its roots to the ‘50s, he became obsessed with Elvis, Buddy Holly and Chuck Berry. Somehow that led to grunge, then psych-rock, then jazz, etc. The list goes on and on and his collection of vinyl records continues to grow.
RELATED ARTICLES
album reviewsbmg recordingsgirl at the end of the world
8.0