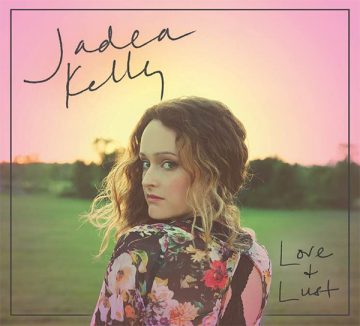 Jadea Kelly gets straight to the point with honest and heartfelt lyrics such as, “I wanna drown it. Way I feel. If I do does it make the heat less real?” These lines are surely apropos in opening this dark and sensitive album of love, turmoil and breakup. Love & Lust is Kelly’s third full-length album released on her own label Darth Jadea Records and marks her best work to date. Having full creative control over the album’s conception has proven to be the best-case scenario as she now has a rare gem that is destined to turn many heads in the music world.

Having spent a good deal of time in Nashville honing her chops, Jadea naturally stepped up her game in songwriting and all other aspects of music. “Writing a masterful song is the top priority of everyone in Nashville,” she explains, and we hear a perfect example of this philosophy on Love & Lust.

Love & Lust’s fantastic production is the result of Stew Crookes’ masterful touch. The dreamy sounds will put you in a trance amidst subtle layers of strings and wide-open sounds of reverb. The album was recorded with analogue equipment on two-inch tape, a process that certainly adds warmth and mystique to the overall sound.

Standout songs include “Make it Easy,” a song with enough power that it could very well make Jadea Kelly a household name. The lyrics and soundscapes are transcendent with arrangements that would be perfect as a soundtrack to a big-budget film. Jadea’s voice transfixes the listener and sets the stage for the rest of the album. Another standout song titled “Can’t Outrun” is a trippy anthem that meanders along with a huge intro before jumping into the infectious beat that is certainly danceable. A ghostly saloon piano supports the string section, giving the song a haunting feel, complementing the stellar vocal track. “Good Girl” is another favourite that leaps out on this release. It is easy to envision a music video here; it has hit single potential and would rank as the second best tune on the album. It’s a callout to a former lover who is about to regret losing a good thing.

Fans of Alternative Folk music and artists such as Kathleen Edwards, Feist and Lindi Ortega will immediately fall in love with Jadea Kelly’s fresh new take on the genre. Love & Lust scores top marks in all categories and certainly stands out as one of the best releases of 2016.

Andre has been writing for The Spill Magazine for over 12 years, dating back to the print days. His passion for music goes far beyond writing reviews for new music and live concerts, he is also an active musician and producer on the Canadian music scene. Having toured North America and Europe with various acts, he is no stranger to dedication and work ethic new bands must endure to make the grade in today's market; Andre always delivers perspective writing that is authentic and to the point. Mr. Skinner typically covers indie rock, grass roots, electronica and is our resident hard rock and heavy metal specialist. He is extremely selective on what bands he covers for articles and you can rest assured they are ALWAYS band to watch with something left of centre to offer.
RELATED ARTICLES
album reviewjadea kelly
8.0