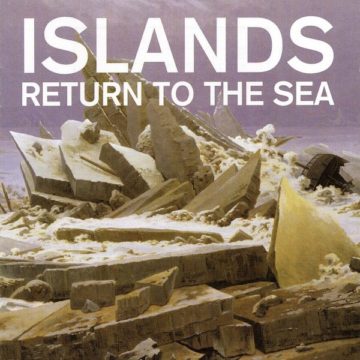 10 years after its original release, the Canadian Indie Rock staple, Islands, remaster and re-release their debut LP. The “light but firm” remaster has never sounded better and is available on all formats; pressed to 2 x 180 gram vinyl at 45rpm. The new sound is accompanied by touched up artwork, never before seen photos and an essay by Nick Diamonds discussing creation of the album. The band will also play two December shows in Los Angeles and New York, where they will perform Return To The Sea in it’s entirety alongside special guests and a string section.

This album is refreshing – full of heart and soul. The group has an organic quality that resonated in 2006 as much as it does today. Islands, although very much indie rockers, have a way of hinting at their love for hip-hop and country music. It’s a more mature and ambitious sound than their previous work in The Unicorns and has an authenticity that its often only grasped in a band’s debut release. There is a touch of Neutral Milk Hotel and a dash of Arcade fire and sprinkle of Paul Simon.

The album opens with the bold singalong, “Swans (Life After Death).” Diamonds’ voice croons with a distinct indie-pop timbre over a driving piano and catchy background vocals. The tune marinates with a deep burn for seven minutes before exploding into the epic guitar solo. As we move on, the infectious “Rough Gem” demonstrates a more straight forward upbeat vibe. “Volcanoes” builds on a myriad of unique sounds from lap steel to clinky percussion. The tune switches back and forth from two-stepping alt-country to emotional dreamy break downs.

In 2006, Islands broke off from all of their previous musical endeavors to release this acclaimed debut album. Return To The Sea was really Diamonds and Tambeur’s ‘return to music’ with a new sound in mind. It’s hard to say exactly what genre they were looking to describe, but that is what makes it so unique. It’s a charming work of art, and there’s no better way to remember the good old days than with this 2016 remaster. In our current generation of too many electronics, layered drum machines and over production this release is almost a novel idea. That sound of real instrumentation and natural recording is both revitalizing and exhilarating.

Here are the first and last paragraphs from Mr. Diamonds dialogue to get a taste of what’s in store…

“On December 31st, 2004, I flew down to Los Angeles from Campbell River, B.C. I was at a puzzling intersection: A few days earlier, my band, the Unicorns, had finally combusted onstage in Houston, Texas. I’d just turned twenty-three. I had thrown all of my possessions on the sidewalk a year prior and now had nowhere to live. I was adrift. My friend Adam Gollner convinced me to come down to LA, where he was writing and researching his first book. The idea was to clear my head and get some sun for two weeks. It ended up raining torrentially every day. After the rain cleared, I invited my former bandmate Jamie Thompson to join me. We spent the next three months in LA plotting our next move, knowing we wanted to continue playing music together after the dissolution of the Unicorns…”

“…For years, I maintained a distance to this record, and considered overhauling it entirely. After Jamie and I had assembled the band to perform the songs live in the fall of 2005, I wanted to re-record everything with them. When the 10th anniversary of the record’s release started rolling around in the spring of 2016, I strongly considered doing a reimagined remix, losing excess instrumentation and caking my vocals in a more professional gloss. For ages I bristled at the record’s flaws; my squeaky, earnest vocals, drums and guitars that sounded meek when I wanted them to sound heavy, precious lyrics, naive melodies. No, this record isn’t anywhere near perfect, and nor should anything earthly be. I’ve only started to realize that this record’s imperfections are exactly what cradles its meaning and curiosities, its heart and spirit. Here it is again. Back in my arms or under my wings, the waves licking our ankles, ready to head back out again. Don’t forget to lift the locked groove.”

After majoring in business & entrepreneurship at UCSB and traveling the world, Andrew moved to Los Angeles to pursue music and not give up his love for surfing, hiking and yoga. He is also in a couple really cool, up and coming, indie-rock bands in LA - Mothlight & Lone Kodiak.
RELATED ARTICLES
album reviewsislandsmanque music
7.0