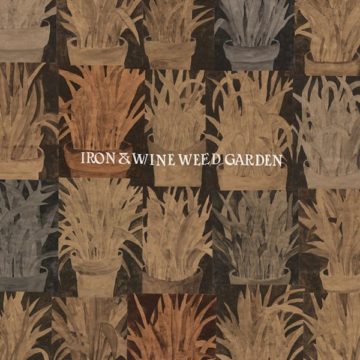 Sam Beam wrote a lot of material for his last album with Iron and Wine, the Grammy nominated Beast Epic. So much actually, that six songs now come out as an EP entitled Weed Garden, which is quite a title. It indicates some kind of weirdness or unconsciousness getting down in the songs. Well, actually there ain’t much of that, no more than usual. The songs on Weed Garden would smoothly fit in along with the material on Beast Epic. There is a little less variation on the EP than on the album, but the songs are just as lovely. They have a strong vibe and seems to float freely and willingly from the band. There are more or less the same themes and the same sound on Weed Garden as on Beast Epic, but apparently these songs needed a little more time before they were ready for a release. They are now, and the result is this fine little EP from Iron and Wine. And why not let Sam Beam have the last word, with a quote from the last song on the EP, the very personal dreamlike ballad about how hard it is to find true love and to believe in it, “Talking to Fog”:

“Let’s say it like the sunrise when it’s talking to the fog
We’re both looking for a light in the window of a house
Beneath our winter branches, underneath our winter clouds
But it’s hard to find.”

From a Scandinavian record player in the middle of Copenhagen Jens Trapp brings you some new Scandinavian stuff. His favorite albums include: David Bowie: Honky Dory and Ziggy Stardust plus everything until Let's Dance The Clash: London Calling Elvis Costello: This Year's Model Genesis: The Lamb Lies Down on Broadway Pink Floyd: especially Wish You Were Here If I should name one, but most of it will do ;-)
RELATED ARTICLES
album reviewalbum reviewsiron & wine
8.0