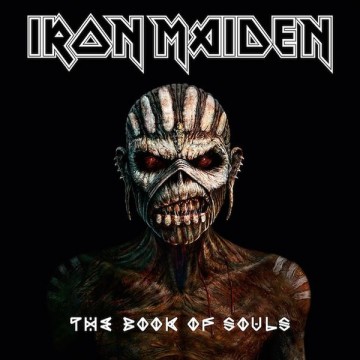 After 40 years of blistering metal, Iron Maiden is back with their 17th studio album, The Book of Souls. The band has not changed their potent recipe of writing, recording and producing; what they deliver on The Book of Souls is exactly what they’ve given their audience over the last four decades with legendary albums like Killers, The Number of the Beast, Powerslave and Piece of Mind.

The Book of Souls delivers a punch with track two, “Speed of Light;” a track that gets the point without fluff and deliver’s BIG with classic Iron Maiden riffs, beastly drums and Bruce Dickenson’s operatic voice and boundless energy. The song is catchy, gutsy, and impactful, which can’t be said for the opener “If Eternity Should Fail.”

The double lead guitar treatment over the doomy power chords on “Shadows of the Valley” gives the audience exactly what they paid for; it’s another standout track that has one of the best opening guitar riffs of the album. Nicko McBrain’s metronomic drumming builds tension leading up to the HUGE first verse at 1:08.

Halfway through the record, the band delivers another classic tune with “Death or Glory,” a song with a familiar galloping triplet groove and wicked lead guitar licks. It could easily fit in on any of their early albums. The final chapter of this solid release comes to us in ballad form: “Empire of the Clouds” brings grand piano, orchestrated strings, keyboard soundscapes, and a monster intro that rolls on for four minutes before the full band kicks in.

Other than an exaggerated use of midi instruments and the odd overdose of fantasy lyrics, the album is a keeper and will stand up against any of their classic albums. Had they trimmed the fat by two or three songs, The Book of Souls could have easily pulled in full marks. Overall, Iron Maiden fans will not be disappointed.

Andre has been writing for The Spill Magazine for over 12 years, dating back to the print days. His passion for music goes far beyond writing reviews for new music and live concerts, he is also an active musician and producer on the Canadian music scene. Having toured North America and Europe with various acts, he is no stranger to dedication and work ethic new bands must endure to make the grade in today's market; Andre always delivers perspective writing that is authentic and to the point. Mr. Skinner typically covers indie rock, grass roots, electronica and is our resident hard rock and heavy metal specialist. He is extremely selective on what bands he covers for articles and you can rest assured they are ALWAYS band to watch with something left of centre to offer.
RELATED ARTICLES
album reviewsbruce dickinsoniron maiden
8.0