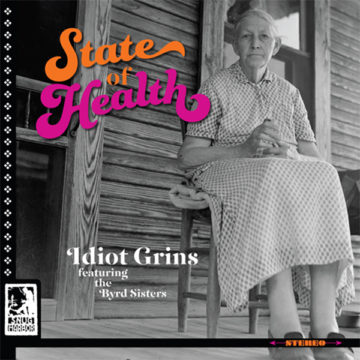 Harkening back to bygone musical times requires detailed musical knowledge and perception, but also a vision of what kind of sound needs to be brought back. Miss out on any of these points and it can turn out to be a simple musical copy-and-paste or kitschy re-hash of once-popular (or not-so-popular) sounds.

Luckily on their third album, State of Health, Oakland, California quintet Idiot Grins escapes all the traps of going down the trail of musical revival. You see, Idiot Grins is bringing back two (or maybe even three) musical styles that are not at the forefront of musical tastes these days.

The first is the horn-driven white soul of the bands that were so popular in the late ’60s up to mid-’70s with bands like The Electric Flag, Chicago, Chase, and Tower of Power, for example. It is no wonder, then, that the band has already collaborated with Tower of Power members. Once you hear the first few tracks on this album like “Get Busy Dying” and “Frock” with their tight horn arrangements, soulful vocals, and great vocal harmonies from the guesting Byrd Sisters, you get the exact feeling why such music was so popular in its heyday.

As the album progresses and tracks like “Televised” and “Mama’s Tears” start sneaking up on you, you are bound to remember what great southern soul and country combinations Dan Penn and Spooner Oldham used to make, without at any moment getting the impression that Idiot Grins are copycats. And then tracks like “Philly Belly Cheesy” bring in the memories of the melodic country rock excellence of someone like Gram Parsons, just with some extra horns in the arrangements. And all of this has a natural musical flow, as if all of these different styles were bound to be together.

All in all, judging by this outing, it seems that all the idiot-grinning Michael Conner, Evan Eustis, John Hansen, Michael Melgoza and Randy Strauss are doing is connected to realizing what good, clean, fun musical combinations they are bringing back to us. So far, I can’t stop grinning along with them.

Formerly a lot of things, including a journalist and a translator, currently a freelance writer living in The Netherlands.
RELATED ARTICLES
album reviews
9.0