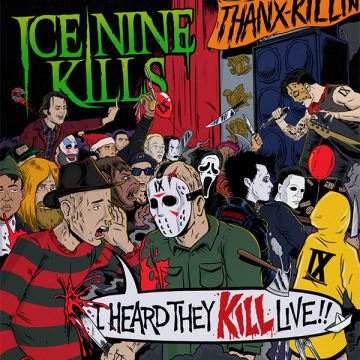 The Boston-based metal core band Ice Nine Kills has released a live album titled “I Heard They KILL Live!!” just in time for Halloween. They sold out a 3,000-capacity venue headliner show on November 30, 2019 at the Worcester Palladium, and recorded the entire album that night. Ice Nine Kills absolutely kills it with this 69-minute live version of their fifth studio album The Silver Scream: The Final Cut. It features 19 songs inspired by horror films Scream, A Nightmare on Elm Street, Friday the 13th and more, that are musically and lyrically genius. It also includes a very well-done cover of Michael Jackson’s “Thriller”.

Ice Nine Kills was created from the ground up, by horror movie enthusiast Spencer Charnas, frontman, and the only original member of the band that remains, and combines metal and punk, and captivating theatricals in their show,s and stunning, throaty vocals that bring the Ice Nine Kills show to life with favorable influences of Slip Knot and Rob Zombie. A video for “Stabbing In The Dark Live In Worcester” was filmed at the Palladium in Worcester, MA show, and was released in early October, ahead of the release of the live album. In addition to the Live Album release, Ice Nine Kills presented their fans with an interactive horror experience with footage from Worcester hosted by Bill Moseley called “The Silver Stream!” on Thursday October 29th at 8 PM EST that promised to be THE most horrific event of this Halloween season. IT… did not disappoint.

Melinda Welsh is an American blogger and music enthusiast, who grew up in the 70s and 80s and is passionate about all kinds of music, listening to any kind of music that she can get her hands on. Her tastes vary from country to hard rock. She can be seen wearing ear buds at work, reading music magazines and articles online, and following bands on Instagram and Facebook. Her favorite quote is "Where words fail, music speaks".
RELATED ARTICLES
album reviewalbum reviewsfearless records
7.0