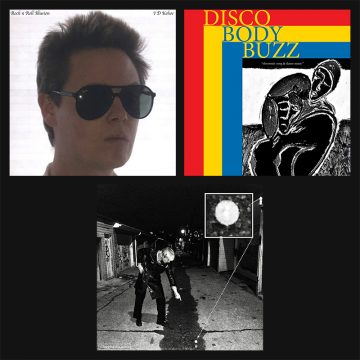 Ian Daniel Kehoe is a remarkably talented musician, best known for drumming with The Weather Station and Julia Jacklin, as well as his work with Daniel Romano and Attack In Black. With 3D Of IDK, Kehoe strikes out on his own, and the release is actually a trilogy he released on the same day, showing his ability to move from one genre to another as all three have their own, very distinct styles. They are entirely solo projects as well. He has written, produced, engineered, and played all instruments on these recordings.

The first, Rock And Roll Illusion, is straight pop rock. If you have ever wondered what Fleetwood Mac would have sounded like with Harry Nilsson as a front man, wonder no more. This is not a criticism, quite the opposite. Kehoe pulls off the almost perfect pop album. Eight memorable, melodic, songs that are instantly recognizable and stick in your head. One spin of “Deja Vu” (aptly titled) and you will wonder if you have heard this before. The incredible “Sci-Fi Lover” is the perfect way to close this particular collection. Witty lyrics, great guitar work and perhaps his best vocals on the album.

Disco Body Buzz is a shorter collection of only six songs, that falls in line with some of the great 1980s mini dance albums from The League Orchestra, New Order and Soft Cell. Not entirely as electric as those artists (although damn close), however the vibe is there. Although “Effervescent Eyes” has very 1980s electro beat. Again, even though this is a ‘dance oriented’ album, he can’t stop himself from writing strong melodies. “Let’s be Reckless” is the highlight of this set, with strong lyrics with a tinge of nostalgia thrown in for good measure. It closes with the clever “Solid Gold”. According to Kehoe, these songs were written in the studio and basically created on the spot, which is pretty damn remarkable, given the quality of them..

The last album is Charging The Stone. Here, Kehoe is channeling John Lennon. On “Pure Is The Child”, he moves into some of Lennon’s most painful lyrics from Plastic Ono Band. “Mother” comes immediately to mind. This is the heaviest of the three albums, and perhaps the darkest. It is also the longest with ten songs. He provides light at the end of the tunnel by the last track, “Faith In Time”.

It is an ambitious project to release three albums in one day, and yet it worked in Ian Daniel Kehoe’s favour. It shows different sides to the talented artist and has allowed him to experiment with different styles and genres. There is a lot of music here. My recommendation–dive in and enjoy. There is a lot to discover here and you will be rewarded.

Born and raised in Whitby, Aaron discovered music through his love of The Beatles. This led to a career in radio, writing for various publications, and ultimately a radio show about The Beatles (Beatles Universe), which ran for over four years. When not immersed in music, Aaron enjoys spending time with the loves of his life -- his wife Andrea, and daughters Emily and Linda (all of whom have an intense love of music too).
RELATED ARTICLES
album reviewalbum reviewsjulia jacklin
8.0