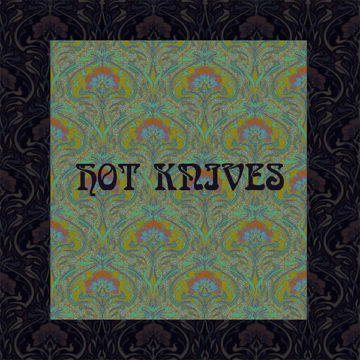 Brooklyn based power trio, Hot Knives, have released Static Bloom, their debut EP ahead of a full length album that is slated for release later this year. While little is known of the psychedelic noise rock band, what is clear is that, while a little rough around the edges, the band sounds equally as influenced by the song writing of Sonic Youth, as it is by the funky blues of Hendrix, and the ambient rock of Bowie’s Berlin Trilogy.

Opening with the fuzzy tidal wave of sound that is “Alhambra Baby”, Hot Knives indulge in their Hendrix inspired fantasies with a hard grooving verse full of funky rhythm, jazzy chords, and guitar tones pulled right out of the summer of love. The vocals feel a touch muddy in the mix, but this song rocks hard and is the most focused and exciting on the EP. “Sfincioni Dreams” takes the music in more of a new-wave direction that takes similar aspects of the guitar style from the opening record and applies it to a slightly more experimental setting within the realms of early punk rock. Unfortunately, again, the sound quality of the recording prevents the experimental nature of the song to take full effect and some parts of the song feel unnecessarily long. The closing track, “Dank Zappa”, sounds like the sonic collision of Hendrix and Black Sabbath; it’s funky, but it also feels like a weighs a ton of two. The song also offers a number of riffs that rival the opening track, giving Static Bloom a killer opening and finale.

While only three songs in length, Static Bloom offers much to listen to while also solidifying a sonic identity for Hot Knives. At times, the band would benefit from shortening some sections of their tracks to ultimately give them a more refined effect. Furthermore, the band would greatly benefit from a cleaner recording quality to give them a clearer and polished sound. That being said, Static Bloom shows a lot of potential for Hot Knives, a band who truly stand out with an incredibly unique sound, that will leave listeners excited for their full length debut.

A passion for music has always been a part of Gerrod’s life. As a young boy, he was raised on a steady diet of the music from The Chili Peppers, Aerosmith, The Stones, Prince, and others from his mum. Raised in the GTA, Gerrod continued to foster his love for music by attending a wide range of concerts and learning the drums. His unapologetic passion for music has no bounds and has spread to a wide variety of styles, whether it be the 90’s rock that sound tracked his teenage years, the jazz he studied in university, or his newfound love for hip-hop. He recently received his bachelors in music and education from York University and is passionate about writing and reviewing good (and less than good) music. Gerrod is also the drummer and songwriter for a Toronto based rock & roll band, One In The Chamber.
RELATED ARTICLES
album reviewsbrooklyn
8.0