SPILL ALBUM REVIEW: HOP ALONG – BARK YOUR HEAD OFF, DOG 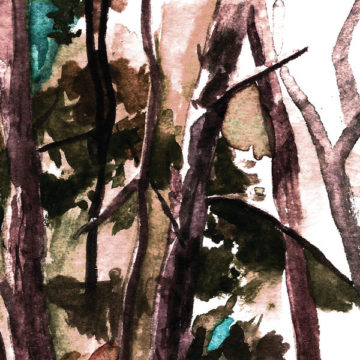 Hop Along
Bark Your Head Off, Dog
Saddle Creek

Hop Along is releasing their third studio album that is completely self produced. Hop Along consists of Frances Quinlan on vocals and guitar, Mark Quinlan on the drums, Tyler Long driving the bass, and Joe Reinhart on lead guitar. The group’s newest album Bark Your Head Off, Dog is best classified as indie folk rock.

The group is still young, which is good because there seems to be some room for improvement. The talent of each individual can’t really be questioned. There are some parts where the vocals shine through, sometimes the guitar is amazing, occasionally the driving bass is the point of focus, other times the drums keep it all together, but there is an issue with getting all the parts to be doing the best at the same time. The most obvious issue will be when the vocals push it too hard. There are moments where Frances Quinlan’s voice just feels strained. It sounds like she is going for moments where she wants to be emulating Florence + the Machine but her voice just isn’t strong enough for that. There are other times where the vocals fit perfectly. Those parts tend to be when she sings in a lower key. I’m always a fan of the acoustic feel of songs, but maybe the dynamics should be played with a little more. That paired with the song writing style make it difficult to find the chorus. There just seems to be some disconnect somewhere

This album isn’t trash, so don’t get that idea. There are definitely bright spots. The melody from “Not Abel” is incredibly catchy, but it suffers from the occasional voice strain that isn’t necessary. That is just how most songs feel. The group has a lot of potential, I just don’t feel like this album has everything tightened up quite yet.

SPILL ALBUM REVIEW: HOP ALONG – BARK YOUR HEAD OFF, DOG