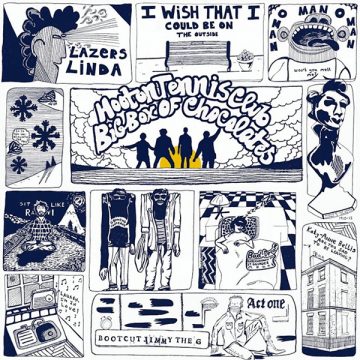 To be honest, the title of the album didn’t grab me (enter obvious Forrest Gump reference here), considering this group’s penchant for long song titles off their last album. The indie boys from Chester, England return with a 41 minute sophomore distraction. Ryan Murphy (vocals/guitar), James Madden (vocals/guitar), Callum McFadden (bass) & Harry Chalmers (drums) continue with their indie, hazy guitar pop songs about the simplicities of life. Having enjoyed “Jasper” off their debut album Highest Point In Cliff Town (2015), I was interested to see if they would continue with their curious literary song titles with simple, yet laid back tracks. After listening to the album multiple times, Hooton’s songwriting talent continues to be on the upswing here as their song structures drip with jangly hooks, with some limited distortion being used in the right spots.

Memories of Damon Albarn (Blur/Gorillaz) come to mind as we close our eyes to Ryan Murphy’s rustic vocals of pop melodicism throughout this balanced album between slow, mid and fast tempos. “Growing Concerns” starts off the list with a slight noise opening for a few seconds as the plodding drums introduce Murphy’s strong vocals, paired with the fuzzy guitar. The guitar sound and tempo in certain areas of the song (along with instrumental pauses) does remind me of “Jasper” off their last album…..? This track gives the album a strong start. Furthermore, I loved the sound bite of the random dog barking during the bridge of the tune …something different, and appreciated. Other catchy songs of note include the openings to “Bad Dream” (the leading chord progressions in the opening of this song reminds me of a sped up Grimes song, “Easily”. Has to be a coincidence, right?) and “O Man, Won’t You Melt Me?”. An idea of note can be found vocally, where Murphy’s vocals stretch on “O Man, Won’t You Melt Me?” as he goes from a primary note to the octave in this song as James sings underneath those vocals. Wonderful hooks abound on most tracks (“Growing Concerns”, “Sit Like Ravi”, “Meet Me at the Molly Bench”) as the themes are varied as well. For example, “Bootcut Jimmy The G” is a lovely “day in the life” of Jimmy (great bass that accentuates this track). “Katy-Anne Bellis” is sung about a flat mate that has moved out. “Lauren, I’m In Love!” is a catchy, happy vignette of a tune about enjoying the company of Lauren. I also love the change in beat structure with the lyrics, as the beginning of a verse is 8 beats, and then the second half of the verse is only 4, which gives the impression of cutting off the verse, but the lyrics rhyme well enough for us to ignore that fact as we feel the verse would continue. Clever. The band guides us through a variety of genres throughout this release with “Sit Like Ravi” (country-esque), “Statue of the Greatest Woman I Know” (60s jangle) and “Frostbitten in Fen Ditton” (I can see this as shoegaze… yeah, I stretched it.). Hooton Tennis Club also has a penchant of weaving noises and other instrumental delights throughout tracks such as “Meet Me at the Molly Bench” (bicycle bell), and “Lazers Linda” (cowbell and other interesting sounds) along with other aforementioned songs. The album ends with the title track “Big Box Of Chocolates”, which strangely, I feel was the weakest song instrumentally (chord progression-wise) on the album? Kind of wondering why they put this song last on the list? I think a stronger track would have better fit here to end this sublime recording.

The boys come through again with another underrated indie gem of a slow burn album. Easing into the next phase of their adult sound and continuing their growth as a band, Hooton Tennis Club’s 2nd album is infused with textured musical tendencies, mixed with the simple lyrics of a sage. There is no blanketing of instrumentals as each band members have their own distinct color sonically, when you deconstruct the poignant arrangements. They’re moving in the right direction for their fans or new listeners alike as this album is more about quality than content and swims deep in simplistic, chilled mastery. This IS a Hooton Tennis Club album that represents their eclectic grace and flair wrapped within a box of chocolates as each track represents sweet, yummy goodness. With comparisons to Teenage Fanclub, Pavement and Blur, Hooton Tennis Club haven’t taken a huge step away from what they’ve done previously, but it’s enough to keep people interested in listening to this album more than once with a more discerning ear.

Insert pretentious stuff about me here. I was born at a very young age. I am pretty, funny... without the comma. Easily distracte
RELATED ARTICLES
album reviewsbig box of chocolatesheavenly recordings
8.0