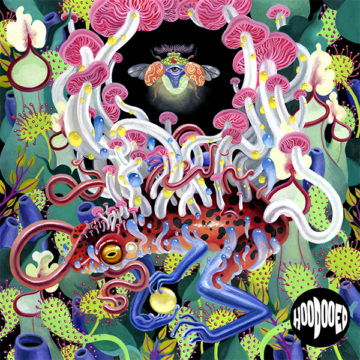 For their fifth release, Quebec-based rock group Hoodooed have released Lotka-Volterra, an experimental, nine track album which revels in its own obscurity, quirks, creativity, and refusal to remain in one stylistic region for very long.

Opening with a fuzzy radio playing Elvis’ “Always On My Mind”, which slowly distorts into a wave of fuzzy guitars before erupting into the riff heavy “Invisible Man-Sized Parasite”. While it is among the most straightforward songs on the album, it is also one of the strongest as it takes inspiration from the acid rock of Queens Of The Stone Age while reminiscent of the psychedelia and chaos of the late ‘60s. The album continues with the lo-fi rock of “Sponges” and “Drosera”, while embracing a New Orleans jazz sound on the kazoo-led and pots and pans-backed “Drunken Fly Swatterin’ Blues”.

As I mentioned, Lotka-Volterra is a highly experimental album, taking inspiration from all sorts of contrasting avenues from the last six decades. While on paper, the fusion of ‘60s pop, new wave, and funky, Hendrix inspired, wah-fueled guitars sounds more conflicting rather than constructive, Hoodooed are able to make it work across the album, and even sometimes, on the same song – see “Worms” for this exact example. Lotka-Volterra is a dangerous album with the band intentionally choosing the path of most resistance as they take daring risks – some of which pay off more than others – however, the album can sometimes feel unfocused as it continues through its mystical sonic journey.

While it struggles to find its center, Lotka-Volterra is the most experimental independent release I have heard in a very long time; one which I would highly recommend should you like your music to thrive on unpredictability and quirkiness. I am certainly interested to see what comes next from Hoodooed and am beyond intrigued to see how such a level of chaos and improvisation translates on the stage.

A passion for music has always been a part of Gerrod’s life. As a young boy, he was raised on a steady diet of the music from The Chili Peppers, Aerosmith, The Stones, Prince, and others from his mum. Raised in the GTA, Gerrod continued to foster his love for music by attending a wide range of concerts and learning the drums. His unapologetic passion for music has no bounds and has spread to a wide variety of styles, whether it be the 90’s rock that sound tracked his teenage years, the jazz he studied in university, or his newfound love for hip-hop. He recently received his bachelors in music and education from York University and is passionate about writing and reviewing good (and less than good) music. Gerrod is also the drummer and songwriter for a Toronto based rock & roll band, One In The Chamber.
RELATED ARTICLES
album reviewalbum reviews
6.0