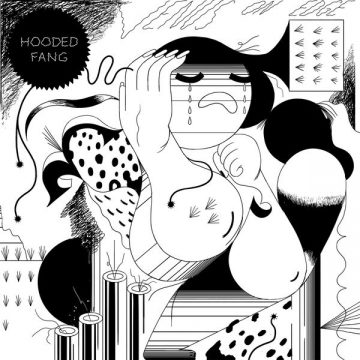 My first encounter with Hooded Fang was on a compilation called Milkin’ It, an In Utero tribute record littered with every corner of Toronto’s rich music scene. On Milkin’ It, Hooded Fang reimagined Nirvana’s “Tourette’s” as a spacey psychobilly jam that thumbed its nose at half-baked, low-hanging-fruit renditions of classic ‘90s karaoke jams (I’m looking at you Every Time I Die, Cancer Bats).

Hooded Fang is more than happy to keep the blood rushing and the pupils dilated, but only on their terms, and fortunately for the listener, their terms look like a contract written in crayon on the back of a kid’s menu.

Hooded Fang’s new record Venus on Edge is the soundtrack to a montage of a meltdown, the sonic embodiment of a poorly disguised delusion, John Wayne Gacy in a clown costume. Venus On Edge takes live guitars and synthesizers and frantically tugs and warps them to make lampshades out of their skin.

Although Hooded Fang could be compared to the hundreds of other goofy, lo-fi surf-rock bands, there is much more going on here. The band trades in the stoney, friendly beach bum for the jewelry-slinging boardwalk tweaker.

“Dead Battery” evokes the charm of Sisterworld-era Liars, “Plastic Love”’s chorus bursts out of the speakers with the confidence of an arena Rock sing-along if it were curated by a B-list Batman villain, and “Tunnel Vision” echoes sparse, angular ought-rock bands like Les Savy Fav and Wolf Parade.

Although probably intentional, the record can be exhausting. For the majority of “A Final Hello,” vocalist Daniel Lee repeats, “I know this is the enemy” enough that the listener starts to tire of what seems like a slow-burn Andy Kaufman-esque experiment.

Much like The Velvet Underground’s “Venus In Furs,” Venus On Edge is hypnotic and relentless. And on it, Hooded Fang manage to concentrate all of the camp and sugar highs you’d get out of a Saturday morning cartoon if you didn’t go to sleep on Friday.

Marko Woloshyn is a Mississauga-based writer and musician. He owns a limited edition repressing of Mclusky Do Dallas and one time at a concert a drunk woman told him he looked like Keira Knightley.
RELATED ARTICLES
album reviewsdaps recordshooded fang
8.0