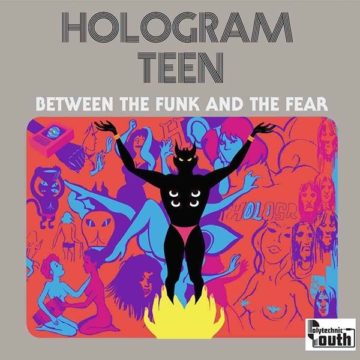 Hologram Teen
Between The Funk And The Fear
Polytechnic Youth

Hologram Teen is Morgane Lhote, known mainly for her work with Stereolab from 1995 to 2001 (she played keyboards). She left the band to join The Projects, and in 2005 joined Garden. In 2016, she formed the project, Hologram Teen and to date she has issued an EP (Marsangst, 2016), and Between The Funk and The Fear, her debut album under that name.

This mainly instrumental, electronica album is full of wonderful melodies and unique sounds. Using some French spoken word, Lhote has created an album that flows from beginning to end. The music borrows from several genres and several decades, but overall it is her sound, her vision the listener gets.

Lhote has spent a great deal of time in France, New York City and is now settled in Los Angeles where this album was put together. Given her varying living experiences and her time with Stereolab, it is no wonder that she is able to produce an eclectic, yet totally cohesive album, such as Between The Funk and The Fear.

Lhote has had some assistance with the record, Mainly Sukia, who she collaborates with on the track (and first single), “God(d) Of Thunder Vs. Sukia. Sukia, an electronica band out of California and their sound has been fairly cinematic. They bring this to Lhote’s music, although she is already there as much of this album would not be out of place in a horror film or Stranger Things soundtrack. “God(d) Of Thunder Vs. Sukia” is an intriguing song full of little surprises and twists and turns throughout the track. Not instantly accessible, but given a chance it lingers with the listener.

Also assisting Lhote on this album is Swedish musician Orange Crate Art, who also brings atmosphere and distinct sounds to the album. It is all electronic and it all fits together. The music plays and when left with one’s thoughts, this album transports you through space and time. A big achievement.

The album would benefit from some challenges here and there. I was expecting some more experimental sounds at times, and as the songs edge that way, Lhote pulls them back into a more conventional form. Listen to “Escape From Paris (Orange Crate Art Remix). It gets very close to some organized insanity, but never quite goes there.

Overall, an impressive debut. Lhote has been around since the 1990’s and she has learned a great deal. Now that she is fronting her own project she is able to show the musical world what she is capable of and this is an excellent example of what she can do. More than that, it also shows potential. This project is just starting out and she can take it wherever she wants, and I hope she does.

Born and raised in Whitby, Aaron discovered music through his love of The Beatles. This led to a career in radio, writing for various publications, and ultimately a radio show about The Beatles (Beatles Universe), which ran for over four years. When not immersed in music, Aaron enjoys spending time with the loves of his life -- his wife Andrea, and daughters Emily and Linda (all of whom have an intense love of music too).
RELATED ARTICLES
album reviewshologram teenmorgane lhote
7.0