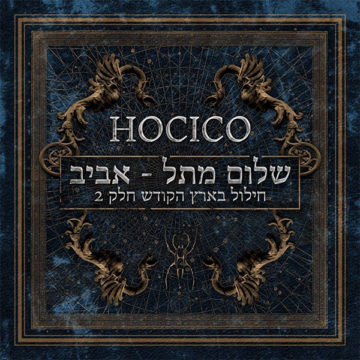 In 2005, Hocico released a live album, Blasphemies In The Holy Land (Live in Israel), 13 years later they have released the sequel, and it is just as intense and energetic as the previous release. They have released live albums in between the two (2014’s Die Hölle Über Berlin being the most recent), but Shalom From Hell Aviv – Blasphemies In The Holy Land Vol. 2 has them back performing live in Israel and stunning not only the audience attending, but those listening to the album.

Hocico is a duo, Erk Aicrag (Erik Garcia) on vocals and Racso Agroyam (Oscar Mayorga). They are based in Mexico and came together in 1993. Since then they have released 11 studio albums and a number of live albums, with their own brand of electronica mixed with punk and screamo. Aicrag’s voice is strong and commanding. He uses it like an instrument that fits in with Agroyam’s programming.

It all works. They produce their own unique sound, full of rage and melody. Quite a combination. Some of the songs come off brilliantly live, such as “A Fatal Desire” (from 2008’s Memorias Atrás) and “Forgotten Tears” (from 2002’s Signos de Aberracion). It is a live album, and the energy is felt and heard throughout.

This is a terrific album, and fans will enjoy. Collectors note, it is a limited edition, so get one while you can. Hocico is a band that has, over the past twenty years produced a fine catalogue of albums and music. This is a welcome addition to it.

Born and raised in Whitby, Aaron discovered music through his love of The Beatles. This led to a career in radio, writing for various publications, and ultimately a radio show about The Beatles (Beatles Universe), which ran for over four years. When not immersed in music, Aaron enjoys spending time with the loves of his life -- his wife Andrea, and daughters Emily and Linda (all of whom have an intense love of music too).
RELATED ARTICLES
album reviewalbum reviewsout of line music
8.0