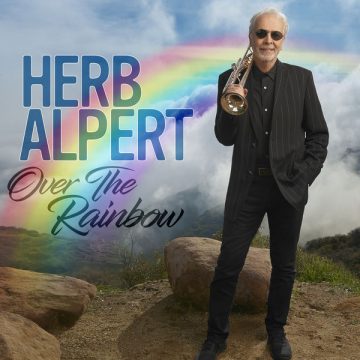 With his 41st studio recording, Herb Alpert returns to what he does best and with apparent ease: interpreting others’ songs and making them his own. The 84-year-old musician has never stood still, carving out his own niche and pioneering a style that has been utilized in many different genres. Over The Rainbow is a very creative album, and while the style is easy listening, that does not mean it is simple or unenjoyable.

The album opens with a new song which Alpert co-wrote and produced, “Skinny Dip.” His trademark trumpet explodes in the speakers. It’s a truly wonderful introduction to a very strong album of covers, on which he turns the originals into his own creations.

Alpert uses vocals effectively and sparingly. “What A Wonderful World” begins with spoken word by Alpert, building to the use of vocals by the end of the song. It’s a perfect way to end the album. Sometimes, however, the vocals are not needed and bit too modulated.“Ain’t No Sunshine,” for example, would have been better as an instrumental.

Give “South Of The Border” a spin. It’s a brilliant but all-too-short interpretation of a classic that has been recorded hundreds of times. Here Alpert uses his trumpet to paint the colours of the music with a deceptively simple arrangement.The listener transported not only to another land, but another time. He does this while remaining contemporary, which is quite a feat.

This is a beautifully recorded album with few welcome surprises. It’s perhaps a bit too slick at times, but as a whole it works. Over The Rainbow is everything one would expect from Herb Alpert and it does not disappoint.