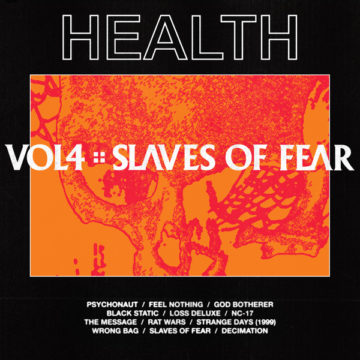 Dante Alighieri imagined an entrance to hell reading “Abandon hope, all ye who enter here”. On VOL. 4 :: SLAVES OF FEAR, HEALTH unremittingly grapples with lost hope and death. Lyrically, the band explores existential themes unapologetically, in the style of past tour mates Nine Inch Nails. This album demonstrates that, in addition to the high quality of his own recent music, Trent Reznor’s legacy—aggressive synths, drum machine beats, and walls of burned-out amps—is alive and well.

For HEALTH newcomers, Jake Duzsik’s clean singing style distinguishes him from the more typical vocalists of heavy music. Tortured vocals such as Sara Taylor’s frantic screaming for Youth Code or George Clarke’s shrieks and growls in Deafheaven (both past tour mates of HEALTH) are absent, and instead, more focus is placed on the exceptionally solid, honest lyricism. On “BLACK STATIC”, Duzsik describes a scene reminiscent of Marilyn Manson’s “Third Day of a Seven Day Binge” with the lines, “Six in the morning/everyone’s coming down/Whatever we’re taking/everyone’s running out/God is coming/Don’t let them believe”. On the following track, “LOSS DELUXE”, he sings, “Here we’re young and ugly, only if we’re lucky/We get to watch the ones we love get sick and break down”.

At the end of the year, VOL 4 :: SLAVES OF FEAR will probably be remembered as one of the most atmospheric albums of 2019.

Wayne grew up in southwestern Virginia on a steady diet of country music before graduating to the Clash, Danzig, Fugazi and the indie and grunge scenes in the 1990s. He lives for live music and writes for Spill as a backup plan in case Trump wins re-election and he needs some Canadian connections.
RELATED ARTICLES
album reviewalbum reviewshealth
8.0