SPILL ALBUM REVIEW: THE HEAD AND THE HEART – SIGNS OF LIGHT 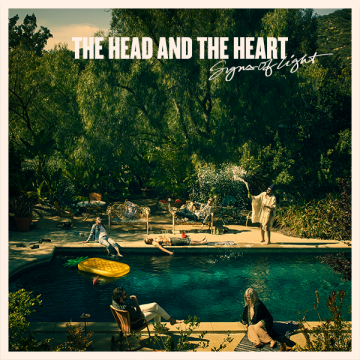 The Head And The Heart
Signs Of Light
Warner Music Group

The Head and the Heart have come a long way from their old-school revival folk-rock, debut back in 2011. The Head and the Heart was laden with beautifully simple arrangements, strewn together with charming drum claps and soothing violin sounds.  But their greatest advantage was their lyrics, dynamic words that reminisced 70s rock in the vein of Bruce Springsteen, which were showcased on the singles “Down in the Valley” and “Lost In My Mind”. What followed was somewhat less memorable. Let’s Be Still found ways to simultaneously move forward poetically (see: “Cruel”) while also playing haphazardly with misdirection (see: “Summertime”). 2013’s uneven sophomore release is now followed by Signs of Light, an antithesis to its predecessor so consciously laden with joyous sunlight that the bleak clouds hovering over Let’s Be Still seem a far flung thing of the past.

Lead single and opener, “All We Ever Knew”, was the first indication that the pace was changing for this Seattle six-piece. It’s fast guitars and “lalala” chorus attempt to bring old sentiments to the forefront of modern indie pop. Tracks like “City of Angels” and “Take A Walk” represent similar strides, with those Head and the Heart central pianos fluttering along while finding new friends in some subtle synths and pop percussions. In their new songs and words, The Head and the Heart have found an entirely new generation of music to be inspired by. Take “Colors” for example, which sounds like a past 80s rock-radio hit fronted by the likes of Peter Gabriel in his prime. Their evolution from their debut seems more natural here than in the dreary corridors echoing on their sophomore. The album’s best track “Rhythm and Blues” fires off a strong vibe of old-school rock to propel the band in a more clear direction than before.  The epitome of this momentum is in the Southern-tinged rocker “Dreamer” whose fast drumming and preaching chorus resonate most deeply with the band’s roots, now soaring with electric guitar solos but still reliant on those softer piano moments. Even adding more fuel to this new fire is the combination of “Oh My Dear” and “I Don’t Mind” who blend into one another and stand together as the album’s most organic moment, growing into something really compelling in the second act.

The album still waivers with some less substantial moments. The song “Turn It Around” is something that would come out of a far less mature artist. Words like “You know the feeling I’m talking about, Every woman and man’s been down and out” fall flat in their insincerity. The title-track, and closer, manages to lie somewhere in between. Written by Josiah Johnson, the band’s vocalist, who has sat out on this album to recover from addiction. While full of heft and deeply affecting, “Signs of Light” fractures for the same reasons Let’s Be Still did – the music and vocals just don’t elevate the words the way they should.

What we’re left with after 13 songs and 50 minutes is a fairly strong record, much more memorable than its predecessor but lacking a bit of the same deeper lyrical content we’ve come to love from this band. It seems when one aspect takes center stage for The Head and the Heart another is less attended to. For their next outing, the band should be more focused on fixing this disparity. As for now Signs of Light is just good enough to click replay at least a few more times before that final California summer sun sets.

SPILL ALBUM REVIEW: THE HEAD AND THE HEART – SIGNS OF LIGHT

Here's what we think...
Spill Rating
Fan Rating
Rate Here
New Criteria
10
8.0
7.0
Total Spill Rating
8.0
Total Fan Rating
You have rated this
Album Reviews
all we ever knewcolorsdreameri don't mindrhythm and bluessigns of lightthe head and the heartwarner music group
all we ever knew, colors, dreamer, i don't mind, rhythm and blues, signs of light, the head and the heart, warner music group
About the Author
Robert Defina

Robert Defina is an avid critic both on paper and in person. He spends more time writing album reviews than he does worrying about his future. He hopes that this sort of procrastination never grows old.
RELATED ARTICLES
colorsi don't mindrhythm and blues
9.0